The ambitious, bold and hungry start their week with The Business of Business!
Markets
7.13.18   3:02 PM Markets

Build-A-Bear will weather this storm, according to company data

Despite a rough week for the chain after a fumbled promotion that resulted in thousands of unhappy customers, the company has a strong retail footprint that's likely to see it through

As the custom bears can cost a lot — upwards of $75 of more — it's no surprise that unmanageable lines formed at the company's 328 locations. As a result, the stores were shut down, police were called in, and the company is suffering a PR black eye. The fumbled promotion took off on social media and news outlets, causing the company to enter into a period of frantic crisis management.

It's likely, though, that the brand will survive and will continue to grow, if data we track for the company tells us anything. Formed in 1997 and 160 million teddy bears sold to date, the chain is now dotted throughout the United States as you can see in the map below (subscribers can click here for the full store listings). 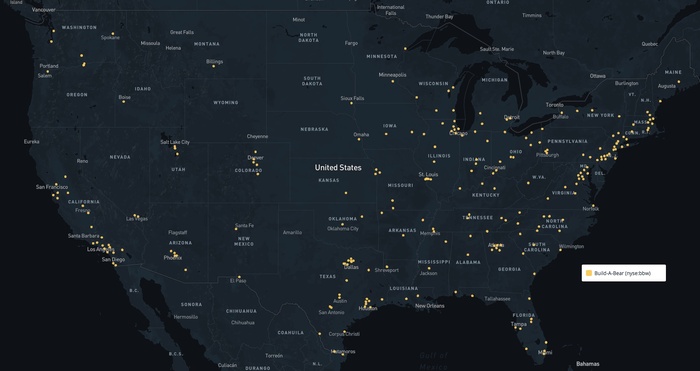 That's a lot of stores for a relatively new brand, and they tend to be located in urban, higher-income areas.

In fact, virtually every Build-A-Bear is located in an area with a higher-than average income, as the map below shows (click for a closeup). 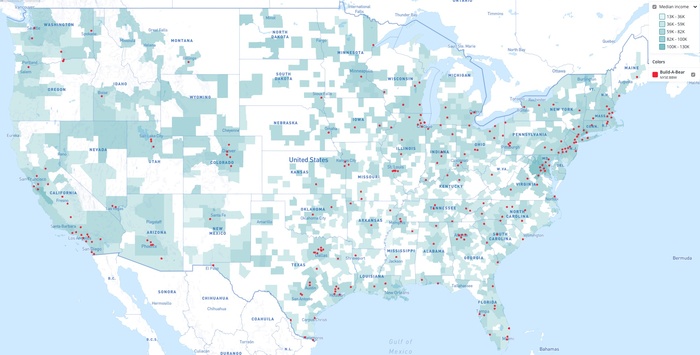 The company is strong employee-wise as well, with over 2,000 employees listed on LinkedIn.

Build-A-Bear CEO Sharon Price John appeared on The Today Show this morning to apologize for the kerfufle, saying, "I am sorry that we were not able to provide the service that we wanted."

"We are doing our very best and we are staying very focused on making sure that we do the best we can to make it right for people."

The company says that it handed out vouchers that would be valid through August to those who were turned away.

Given the smart retail footprint, large workforce, and quick response via media, it's likely that this even will be forgotten shortly, especially as holiday season approaches.

In fact, Build-A-Bear Workshop's stock is up 7% this morning alone.