The ambitious, bold and hungry start their week with The Business of Business!
Markets
3.27.18   1:14 PM Markets

Black Panther is the #1 super-hero movie - how's the merch doing?

Over the weekend, Black Panther blew past The Avengers to become the #1-grossing superhero movie in the United States, and it's well on track to smash more records as well.

While it still can't compare with the box-office beast that is Star Wars, Black Panther is doing extremely well in terms of merchandise sales, dominating the Amazon rankings for the past two months as you see in our chart below. 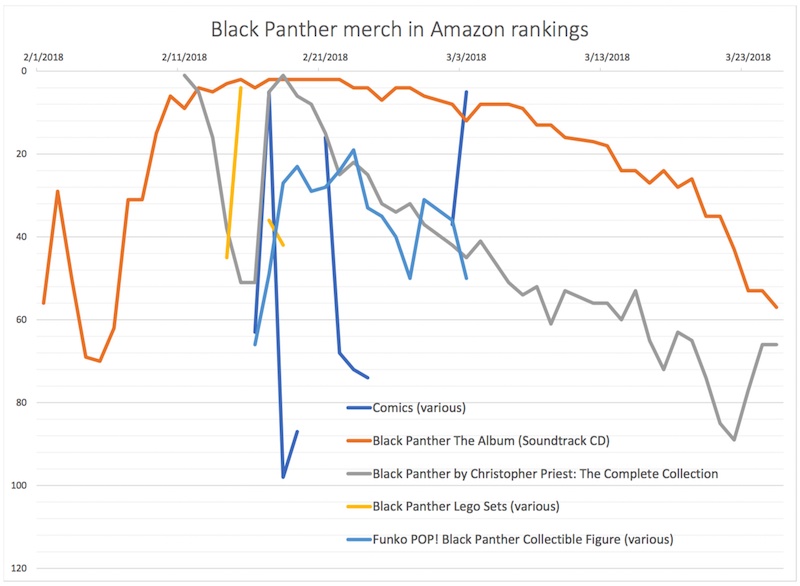 With no sign of slowing down, the Disney/Marvel blockbuster is now:

Disney took a big chance by adding this arm of the Marvel Universe - and marketing a major blockbuster with an almost entirely black cast. But Black Panther proved there was an audience. A huge audience.

Exclusive: Grandmaster Bojan Tunguz on what it takes to break Kaggle’s Top 10

Nvidia data scientist and Kaggle Grandmaster Bojan Tunguz breaks down how he became the first to be ranked Top 10 in all four of Kaggle’s categories.
Ivan De Luce
6.21.21   5:00 PM
People

It's a good time to get hired at an airline: American Airlines job listings are back to pre-pandemic levels

American Airlines has job openings a rate not consistently seen since February, 2020, prior to the pandemic.
Paul Smalera
6.21.21   4:47 PM
Markets

Venture firm Andreessen Horowitz has launched a news publication aimed at anyone interested in the future of Silicon Valley. Meanwhile, one company is letting its employees take an “entrepreneurial leave” to pursue side gigs.
Ivan De Luce
6.18.21   7:01 PM
People

While you wouldn't want to read too much into one hiring announcement, PwC's investment is a pretty big indicator about what the next few years of economic activity will look like.
Paul Smalera
6.18.21   6:40 PM
Markets

With its Depop acquisition, Etsy looks like it's on track to build an empire in resale and handmade goods.
Jael Goldfine
6.18.21   3:38 PM
Features

Experts like Robert Schiller are arguing whether NFTs are a bubble, a fad, an epidemic — or here to stay

At the heart of the bubble kerfuffle is a question of the language and data: What constitutes a bubble, and how do we know if we were even in one?
Joon Ian Wong
6.18.21   1:55 PM
Features
View All