The ambitious, bold and hungry start their week with The Business of Business!
People
11.1.18   5:34 PM People

Comparing the best-selling toys lists from 2016 and today gives some insight into the shifting focus of what toys kids want.

Walmart ($WMT), the largest brick-and-mortar retailer in America, touts itself as "America's Best Toy Shop," which might come as a bit of a sting to those who were once Toys R' Us kids.

Since 2015, we have collected sales-rank data from Walmart's public e-commerce API across multiple product categories, including Toys. By averaging sales-rank data for each category and then counting the number of days each product remained on Walmart's top-sellers list, we get an accurate picture of which toys Walmart customers are buying as holiday shopping season ramps up.

Right now, a 3-pack of 1-foot tall Marvel action figures has dominated the past month on Walmart, as it was the #1 best-selling toy for 31 straight days. 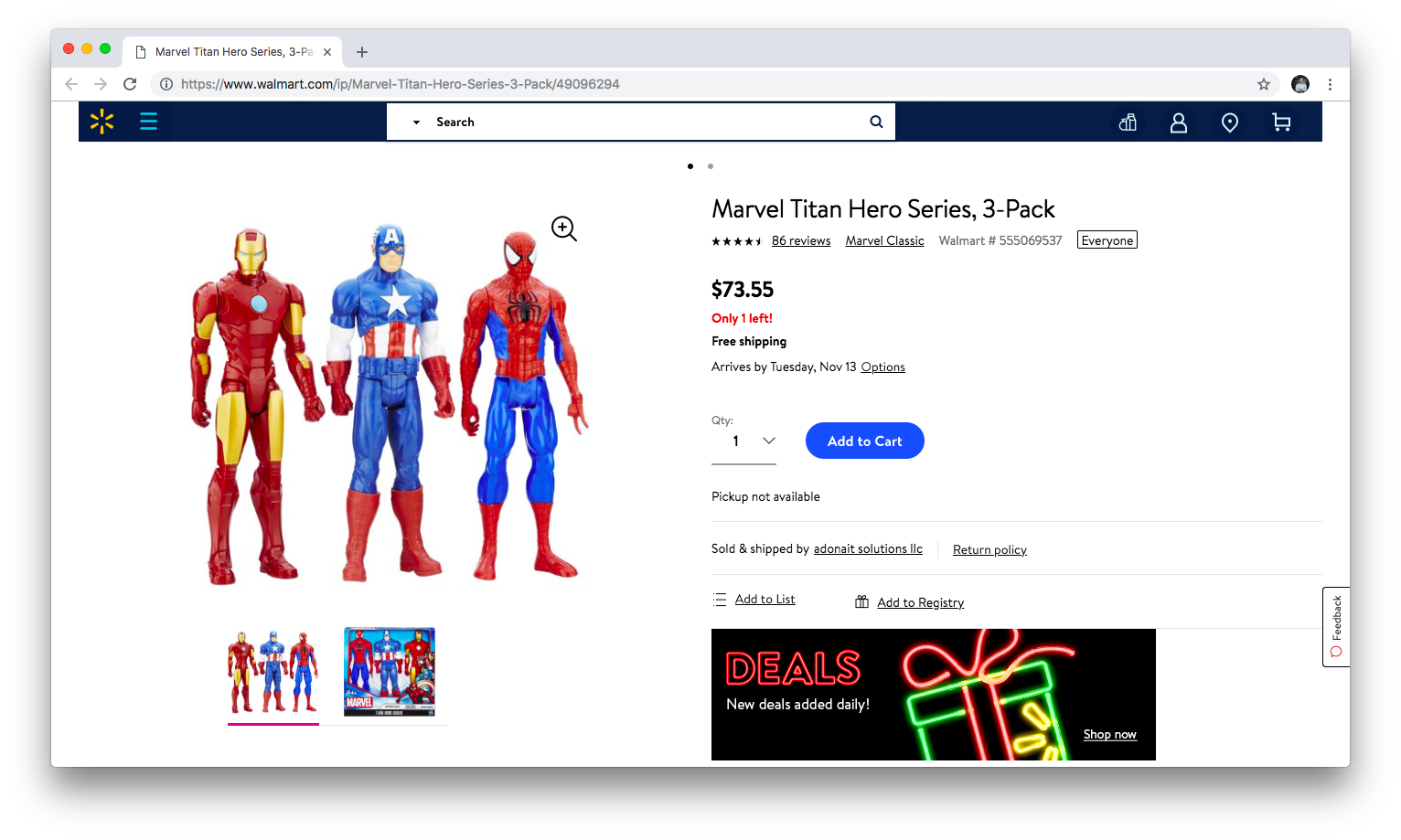 A 9-pack of Hot Wheels cars and a LEGO Snowman round out the top-three toys with the best average bestseller rank.

The overall list is relatively stable compared to the bestselling toys for the 2016 pre-December holiday period, which we extrapolated out from October 1 to November 30 of that year.

Back then, there were only four toys that consistently ranked (more than 30 days) within the top-100, and not one toy had become the unanimous best-seller. According to data, kids were only truly adamant about the latest Nerf Blasters, as well as the "Speak Out" and "Pie Face" board games, which both rose to popularity due to stints on popular TV and online shows like Ellen DeGeneres' daytime talk show.

Only three toys — the LEGO Snowman, the Air Hogs Helix Video Drone, and the FurReal Friends Cuddles My Giggly Monkey Pet — were ranked both in 2016 and 2018.

The stark contrast between best-seller rankings on toys in 2016 and 2018 gives an idea of how much the taste in toys for kids (and parents) have changed in just two years. Namely, there is only one board game that consistently ranked within the top-15 toys at Walmart this year (Simon Swipe), and there aren't any musical instruments classified as toys.

We'll see how the rest of the pre-December shopping season shapes up at Walmart before we declare a true winner as the hottest toy of 2018.