The ambitious, bold and hungry start their week with The Business of Business!
People
7.1.19   2:21 PM People

Amazon doubles down on live sports: hiring for the division has increased 100%

Amazon already has Thursday Night Football, but it's also the king of esports broadcasts and has a deal with the NBA? That suite of programming, as well as listings data, indicates major growth for Amazon's sports ventures.

Amazon ($AMZN) kicked off its live sports offerings with Thursday Night Football two years ago, and now that it's gotten a few points on the board with Premier League soccer and U.S. Open tennis coverage, data shows that Bezos and co are getting very serious about becoming a live-sports broadcaster.

Since July 4, 2018, Amazon job listings that have to do with its "Sports" offerings has doubled, even though the company has yet to settle on a definite strategy for live sports streaming.

Although it may not have a clear direction yet, Amazon has the infrastructure — both through strong programming deals and healthy hiring — to disrupt the sports media industry.

At the moment, Amazon job listings that contain "sports" in their job descriptions are mostly for developers, but according to previous listing data, the company was looking for more people in Buying, Planning & Instock Management.

While that category makes you think of advertising — buying and planning — that category is actually for Amazon shipping sports products, including apparel. 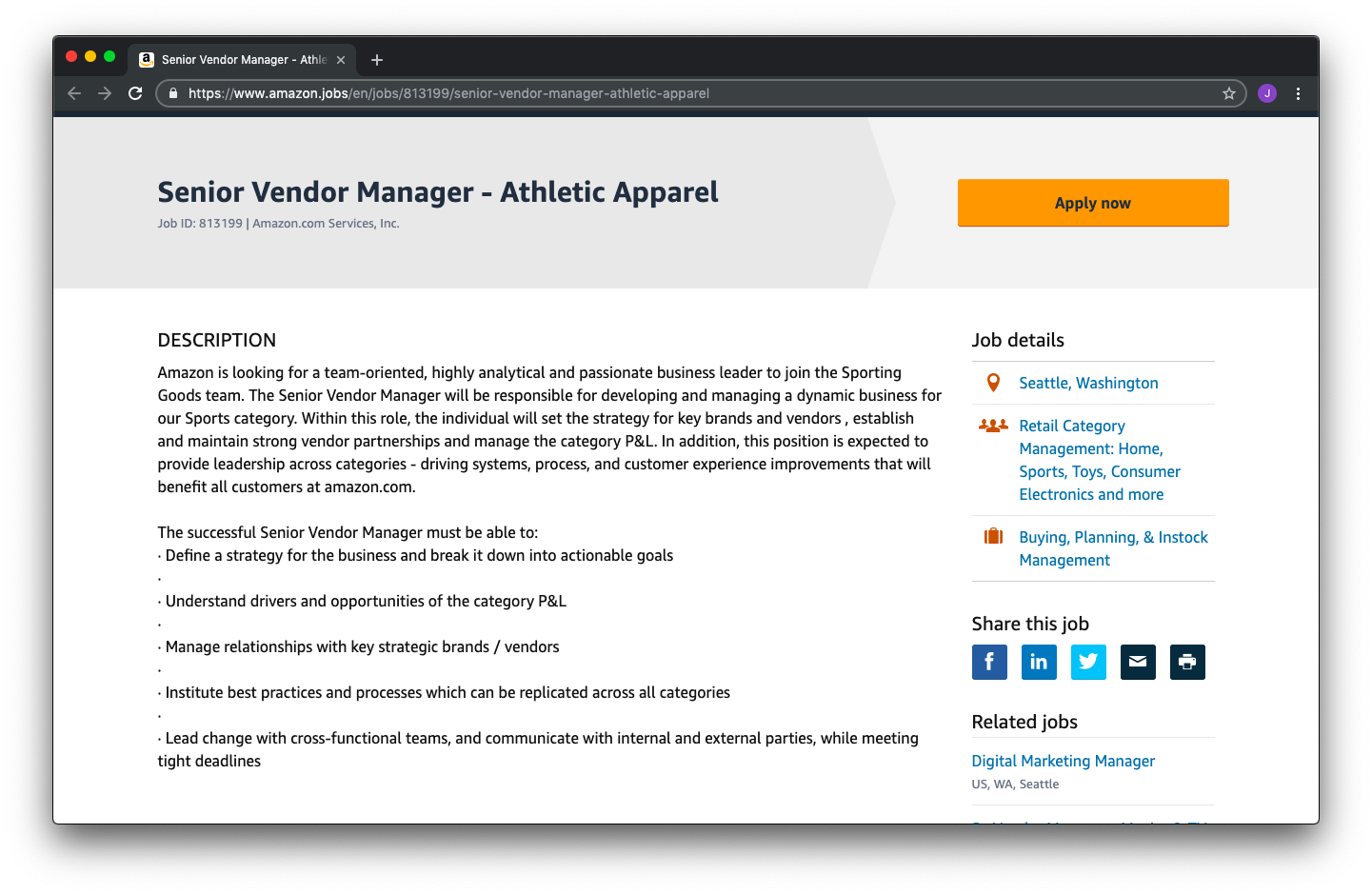 A job within the Buying, Planning & Instock Management division that contains "Sports," which, of course, isn't for live streaming and goes to show how wide Amazon's net of products and services is.

So, the rise of developer job openings, as well as marketing and public relations roles, means that Amazon is ramping up the support on both ends to both ship and market their streaming service.

But what is Amazon up to in the space? Nobody seems to know just yet. Even its Vice President of Global Sports Video at Amazon, ex-ESPN 30 for 30 creator Marie Donoghue, said that the company is "literally at day one in sports."

Calling where Amazon is at in sports streaming "day one" is clearly a humblebrag. That's because Amazon not only has the aforementioned NFL, Premier League, and U.S. Open programming in its back pocket, but it also streams NBA G League games on its Twitch.tv streaming service. And while traditional media players such as Turner ($TWX)  and ESPN ($DIS) are trying to figure out how to get esports — video game competitions — on TV, Amazon-owned Twitch.tv is already the preferred broadcaster of nearly every major esports event.

Although it may not have a clear direction yet, Amazon has the infrastructure — both through strong programming deals and healthy hiring — to disrupt the sports media industry. Think of Amazon's Sports live streaming venture as Forrest Gump playing for the University of Alabama: it has legs, but it needs the right people to tell it when to run, what direction to run, and when to stop.