Architect Scott Francisco has a plan to rethink the Brooklyn Bridge

Francisco, the founder of design firm Pilot Projects, decided to remodel the iconic bridge with rainforest wood while walking to work barefoot across its planks.

Scott Francisco first discovered his love for architecture while watching PBS in the late 1980s, when he chanced upon a program on Frank Gehry, a relatively unknown architect at the time. It was Gehry’s own Santa Monica home, built in and around an existing house, that fascinated the teenage Francisco.

“He’d done this very modest house, it was his own house, with chain link fence and exposed timber and pulling the house apart and exposing the structure and I was just totally captivated,” Francisco tells Thinknum. “And the philosophy of structure that he was talking about, and the aesthetic of it and the rawness of it, it all just totally appealed to me.”

Francisco, then a high school senior, hadn’t found a calling until then, even after his mother had suggested he pursue architecture. But the Gehry Residence changed that. Francisco began applying to architectural schools in his native Canada, and was accepted into the University of Toronto’s program soon after. He went on to teach architecture and work with firms like DEGW, HLW, and HOK before embarking on full-time solo work.

Now, as the founder of Pilot Projects, a systems thinking and design consultancy firm, Francisco oversees projects that would be right at home with the Gehry Residence, including Brooklyn Bridge Forest, a redesign of the iconic New York bridge’s roads and green spaces. The proposal recently won a competition to rethink an already cramped Brooklyn Bridge, which saw increased congestion from pedestrians and cyclists on its upper deck before the coronavirus pandemic.

"I was walking barefoot on my way to Wall Street and I was just really in love with the wood of the boardwalk, the fact of it being wood. And I thought, 'where is this wood coming from?'" — Francisco

Despite the recent win, Brooklyn Bridge Forest began as an idea years before Francisco had his own firm, making it the first pilot project. Back in 2008, Francisco was walking across the bridge as part of his morning commute from Fort Greene, Brooklyn, to Manhattan’s financial district. After reading a magazine article about growing numbers of barefoot pedestrians around New York, Francisco decided to leave his shoes at home for the day.

“I was walking barefoot on my way to Wall Street and I was just really in love with the wood of the boardwalk, the fact of it being wood,” Francisco says. “And I thought, ‘where is this wood coming from?’ I knew it was tropical hardwood. I’m a wood person growing up. My roots are working with wood.”

Knowing that the bridge was in need of new wood for its promenade, Francisco’s concept arrived in a matter of minutes: sustainable wood brought in from a tropical rainforest. Eventually a partner forest was found in Guatemala to deliver the 11,000 planks needed, all while preserving the 200,000 acre rainforest and ensuring its long-term survival. 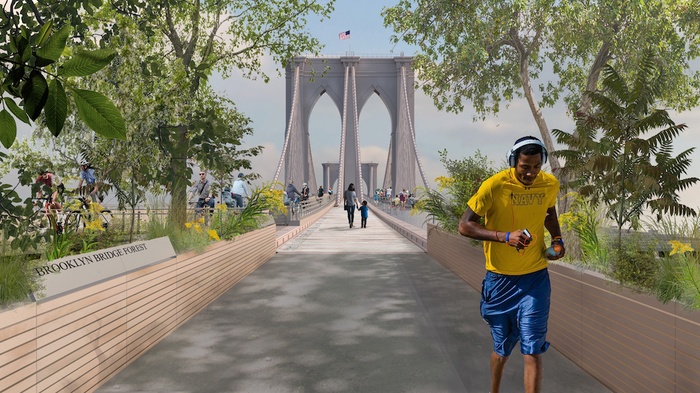 “This is an ideas competition,” Francisco says. “The city hasn’t guaranteed anything that’s going to happen, it’s not like we’re guaranteed the project at all. We still have to convince the [New York City Department of Transportation] that we’re the ones for the job and these are the best ideas.”

After winning the competition, Francisco and his team presented Brooklyn Bridge Forest to the local community board, which will recommend the project to the city, making it one step closer to becoming a reality. Francisco has waited over a decade to get this far, but he says it’s all part of the Pilot Projects business model.

"Culture is a designed thing, just like a building. And culture and architecture are very much the same. We build them, we adopt, we inherit, we inhabit. We never make a building from scratch, there’s no such thing." — Francisco

To get the fledgling firm off the ground in 2011, Francisco and his team settled on a business model that used more lucrative, practical projects to fund their more ambitious endeavors. Many of those practical projects were workplace layout designs for Manhattan-based organizations, including the offices for the Hearst Corporation in midtown, for its technology workforce. Those commissions posed unique challenges involving limited office space and budget.

“It’s really hard to find the balance between good design and someone who wants to pay for it and someone who believes in it, and learning how to listen and how to adapt my ideas to their ideas, their reality,” Francisco says.

Francisco’s team used a trademark method called the Sandbox to work out how much space employees needed. With a kit of parts system, the Sandbox enabled Francisco to co-design the new layout — desks, meeting rooms, communal areas — with the employees themselves, offering an innovative solution to a seemingly run-of-the-mill issue.

Francisco says that culture is the unifying thread between his firm’s seemingly disparate projects. “Culture is a designed thing, just like a building. And culture and architecture are very much the same. We build them, we adopt, we inherit, we inhabit. We never make a building from scratch, there’s no such thing. You’re taking all these components, these skills and approaches, methods, all of that is coming to you as an inheritance and you’re reclaiming that infrastructure to build something new, to address new needs.”

Pilot Projects had a unique company culture from the start. Though the firm rarely posts job openings, architects and researchers have arrived unannounced with a burning desire to work at the firm. Some are interns, some contribute part-time, and some stay for years. "It's a powerful network," says Francisco, who likens the collaborative work environment to a dojo.

Aside from the dojo mentality, Francisco’s other guiding principle is working with his hands. “For architects and designers, making things with your hands and a diversity of experience is of paramount importance. It’s very powerful to know how things work in construction. I think that goes for people understanding systems more broadly, that the physical world and the way things are made go together.” 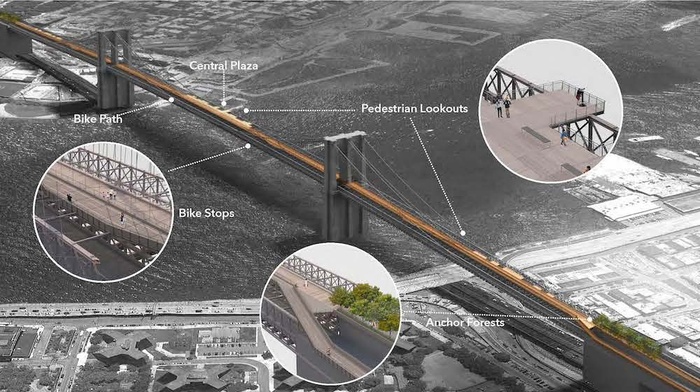 Francisco has spent much of the pandemic with his family in the lake region of Muskoka, near Toronto, at a small boathouse. The dock there, made from wooden planks, has been built, then re-built, by Francisco himself for the last several decades. He plans to keep on rebuilding it every 20 years or so, much like the way the 137-year-old Brooklyn Bridge has had its promenade planks replaced every so often.

Francisco added, “One of the beauties of architecture is you’re participating in this vast interconnected enterprise where so many millions of people have been collaborating and co-creating all of those components and systems we can all build with.”