The ambitious, bold and hungry start their week with The Business of Business!
People
1.31.19   3:22 PM People

Apple is on a hiring spree for its upcoming streaming service (retail, too)

Hiring sprees for media streaming engineers shows that Apple is quickly building out its upcoming streaming service as it continues to lean into retail expansion.

Last night, Apple ($AAPL) reported $84.3 billion in revenue for the December quarter, beating revisions made earlier this month. The figures appear to have satisfied analysts.

That's because virtually all analysts see good things in Apple's future as a service provider via its new streaming service. Noted UBS: Apple is in the "early phases of transitioning from distributor to content aggregator/provider."

Apple job listings data tracked over time reveals hiring efforts to build out the company's "Interactive Media Group" (IMG), which, based on job descriptions, is busy building out the base for the company's upcoming streaming service.

Apple is also busy hiring for its retail operations where it hopes to beat concerns that iPhone and hardware sales will continue to wane (more on that below).

Hiring for the group hit an apex in mid-January with 42 openings. According to descriptions in Apple job listings, the IMG is rseponsible for building media playback, video-on-demand and live streaming technologies:

"Our team is responsible for implementing software services around linear audiovisual media. This includes local media playback, video-on-demand and live streaming of multimedia content. Our media engine is active across Apple products such as Safari, iTunes, Photos, Music, TV on iOS and macOS as well as 3rd party applications."

Digging deeper in the listings for those with "Streaming" in their titles reveals a small but clear hunt for talented engineers who will help build the company's media technology.

Today, there are eight listings with "streaming" in their titles, 7 of which are for engineers:

"Apple's Interactive Media Group (IMG) is looking for a dedicated and hardworking engineer to join our streaming media playback team. This technology powers the streaming media experiences on all of Apple’s platforms (iPhones/iPads, Apple TV, and macOS) by building on core technologies and frameworks such as Core Media, AVFoundation." 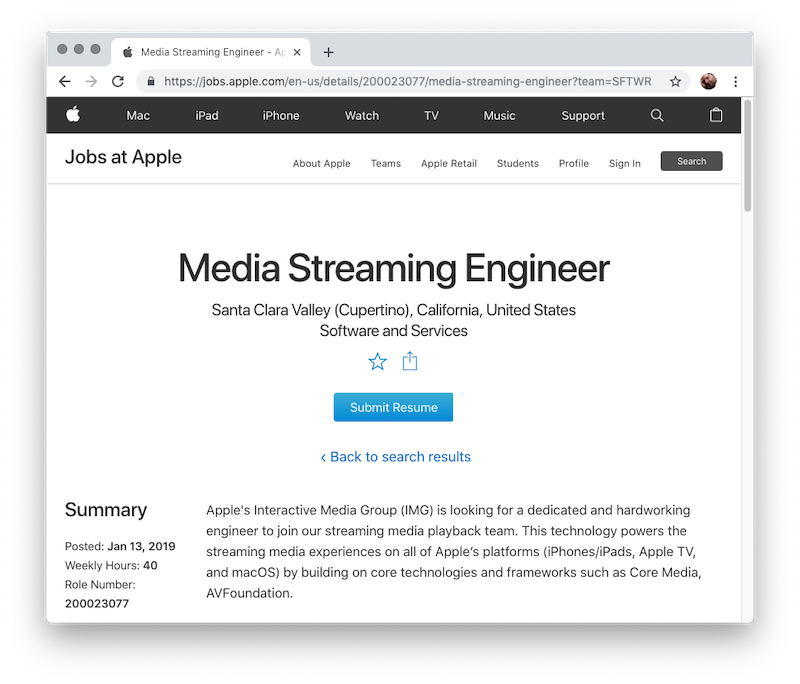 Despite the fact that the streaming service is already dominated by players like Netflix and Amazon (and will become even more crowded in 2019 with entries from Disney and Warner Media) Apple's hardware ecosystem is strong with a broad install base of hardware including iPhones, iPads, desktop and laptop computers, Apple TV, and its HomePod smart speaker.

If Apple can nudge even a fraction of its 360 million subscribers to its video streaming service, it will come out of the gate positioned very, very well.

Apple CFO Luca Maestri noted on last night's call that the company already has over 360 million paid subscribers — that's three times higher than last year and more than Netflix's ($NFLX) 139 million reported subscribers. If Apple can nudge even a fraction of its 360 million subscribers to its video streaming service, it will come out of the gate positioned very, very well.

Investor and analyst concerns for Apple's future earnings may have been assuaged by optimism in Apple's transition to services for revenue, but Apple clearly is not leaving classic retail sales behind. Hiring data indicates that the company will continue to expand its retail operations. Hiring for Apple Retail spiked in November, moving from 303 to 498 openings.

Retail hiring activity is heaviest in Japan followed by a spread of openings at Apple retail locations throughout the world. It is interesting to note a hiring emphasis in Asia. Along with Japan, openings were found in Thailand, Hong Kong, Singapore, Macao, China (where Apple saw a 27% drop in sales), and Taiwan.