The ambitious, bold and hungry start their week with The Business of Business!
People
4.1.19   1:55 PM People

What does Siri really know about sports, the weather, and stock? Not too much, and that's a problem for Apple ($AAPL). There's nothing worse than asking a digital assistant the score of a game only to get a wooden answer that you could have Googled in half the time.

Based on hiring data tracked over the past few months, Apple appears to know this. That's why the company is hiring writers and engineers with a focus on particular subject matters to help make Siri more interesting and enticing to use.

Overall hiring for Siri has been up as the company is looking for ways to improve the ubiquitous digital assistant, but the new positions suggest that the company is putting together subject-focused teams of both engineers and writers to not just improve Siri's knowledge base, but do so in a way that's editorial and entertaining with a particular voice.

It's a smart strategy, too: some of Siri's earliest wins with users included her quirky anecdotes and incidental knowledge. If, say, someone were to ask her the Yankees score and she comes back not just with the score but a curious tidbit about Aaron Judge, Siri could gain an edge on other digital assistants like Alexa simple through her personality.

And Apple appears to be hiring for this very future.

The Siri subject teams (that's what we're calling them, at least) appear to structured around engineers who have a "love" of a particular subject matter. The "Siri - Senior Software Engineer, Sports" is described as such: "The Siri team is looking for someone with a combination of strong technical skills, a desire to build exceptional customer features, and a deep love of sports."

But on top of the subject-matter-expert engineers, Apple is also hiring writers who will bring this varied knowledge base to life with personality.

For instance, a "Siri Editorial Manager" position has been listed that is intended to lead the voicing of Apple's digital assistant while leading a "diverse team of writers and editors". The job listing expects this person to deliver "polished and consistent dialog for Siri, and [you] will collaborate with international writers, designers, engineering, and Apple marketing staff to help Siri be more effective and delightful."

Other roles like "Siri - International Creative Writer" also mention a desire to bring on people who can give Siri a voice of "wit, cultural knowledge, and zeal to explain things in engaging, funny, and practical ways". 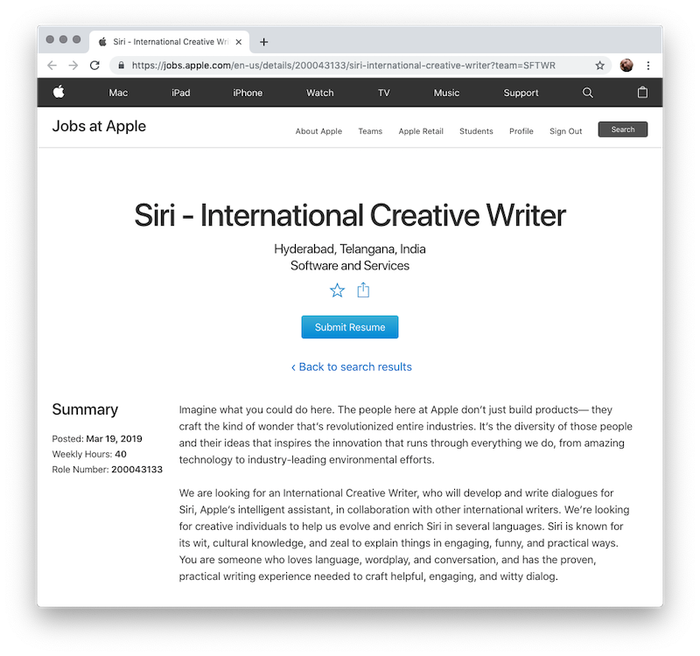