Apple is making good on its pledge to bring its voice-file analytics team in-house.

Apple ($AAPL) faced heavy scrutiny earlier this month for the way it used non-employee contractors to monitor and "grade" customer interactions with Siri, its digital assistant. While the concern was less that Apple was going through the data in the first place — software user agreements imply that interaction data can be used to improve product — it was more the fact that the data was being shared with third-party companies via contractor labor that perturbed both customers and journalists.

Apple quickly issued a software update to allow customers to opt out of Siri interaction grading, and said it would bring the practice completely in-house.

Hiring data shows the company is making good on its promise, as a new Siri "Grading Team" began appearing on Apple's careers sites via job listings.

On September 3 — right around when Apple came under fire — 3 positions showed up on Apple's "Jobs at Apple" site. As of this week, there are 15 such jobs across the globe for Apple's various localized Siri teams.

In total, 19 localized Siri Grading jobs listings have appeared at the various offices, with Grading Analysts being the most common, with the Cork, Ireland, office seeing the most hiring activity so far. That office is where Apple recently laid off 300 Siri Grading contractors.

The Grading Analyst job looks to be directly related to the in-housing effort, noting that the position will "listen and translate Siri audio files and rank levels of Siri response, from customers who have opted-in to the grading program." 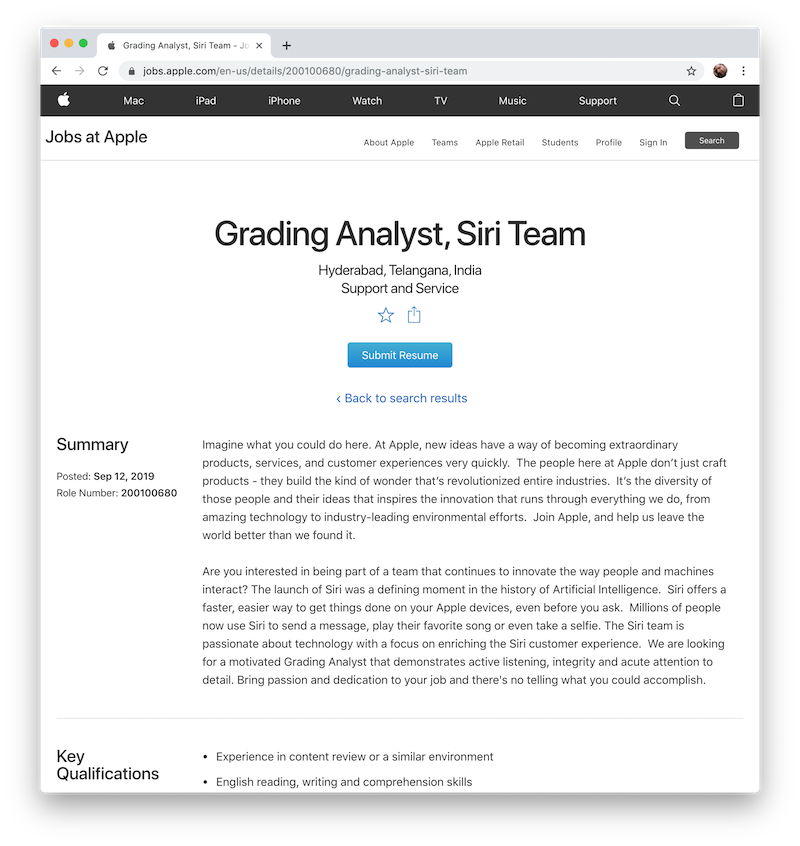 Tech companies are still hiring in Texas, even while publicly slamming the new abortion law

Our data shows that tech companies are still increasingly adding jobs in Texas even after the restrictive new law was adopted in May. In the past year alone, listings have jumped 174%.
Ivan De Luce
9.23.21   7:44 PM
Tech

Houseparty is shutting down but users aren’t going anywhere: ‘We want to be there when they turn out the lights’

Houseparty, the video chat app that exploded in popularity briefly during the pandemic, is shutting down for good, leaving die-hard users without a worthy substitute.
Ivan De Luce
9.23.21   1:34 PM
Markets

Financial Independence Retire Early, as the concept is called, isn’t an aspiration; it’s a way of life for a growing number of millennial and Gen Z workers.
Akil Alleyne
9.22.21   7:55 PM
Features

Lamm partnered with Harvard scientist George Church to develop a new breed of woolly mammoth, which could roam the arctic in just a few years with the aid of synthetic biology.
Ivan De Luce
9.21.21   1:35 PM
Innovation
View All