Apple is hiring for an Augmented Reality team, possibly focused on Apple Maps

Apple's acquisition of AR lens company Akonia Holographics is clear evidence that the company is getting into AR. But what's happening on the hiring front for this new team?

It's easy to conclude, then, that Apple is getting into AR. But when it comes to evidence found in the company's hiring data, there's even more to the story.

On August 11, a job titled "AR Application Engineer" appeared on Apple's careers site. A few weeks later, five more jobs with the term "AR Application" in their titles showed up. It would be reasonable to conclude, then, that Apple is now openly hiring up for a future AR product.

As for what applications Apple could be looking to aim its new AR team (and technology) at, there's some evidence in job listings from earlier this summer that its Apple Maps product may be an early contender. One such listing posted in July for a Product Architect with the Apple Maps Team is particularly revealing through the job's summary:

"Digital maps have become essential tools of our everyday lives, yet despite their ubiquity, they are still in their infancy. From urban mobility to indoor positioning, from LIDAR to Augmented Reality, advances in technology and new kinds of data are powering innovations in all areas of digital mapping. If you love maps and are passionate about what is possible, you will be in great company."

While this job summary may just be an optimistic statement to attract quality, forward-thinking applicants, the mention of AR is evidence that Apple is thinking about the technology for its Maps product. 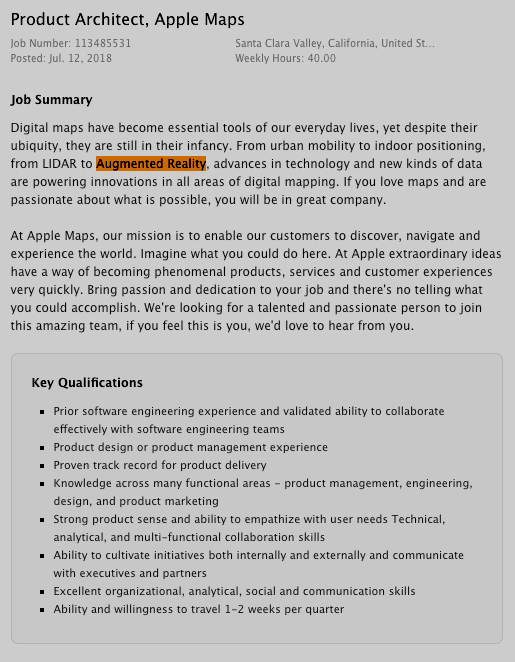 Another position titled "iOS / macOS Engineer" from June is just as interesting, if not more so. This position isn't pinned to a particular team like the "Product Architect, Apple Maps" listing. Instead, it appears to be a general audition for mobile and desktop engineers who possess high-level product architecture and ideation and creation skills. 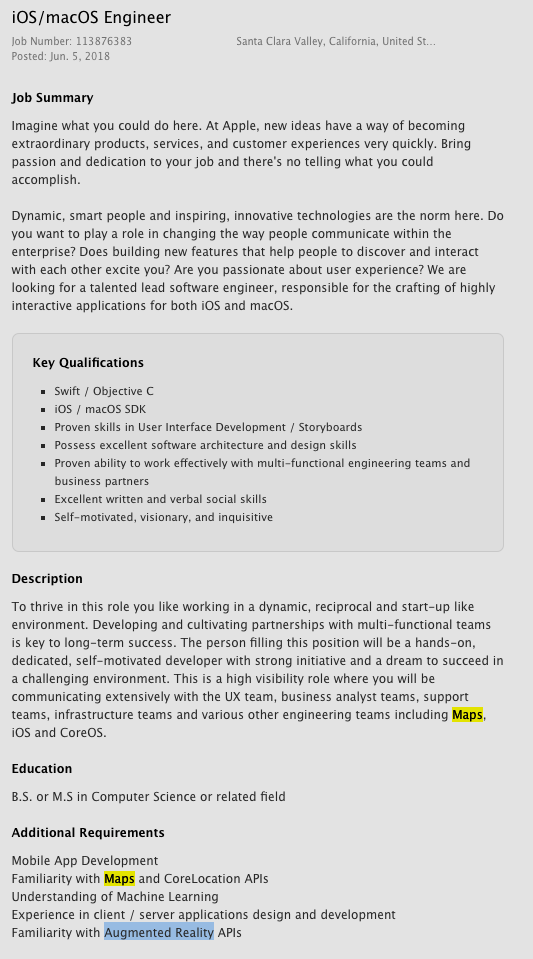 From here, it's pretty easy to put the various requirements and hiring patterns together. And if they tell us anything, it's that Apple is already assembling a team of specialists to connect Augmented Reality with Maps.