The ambitious, bold and hungry start their week with The Business of Business!
Markets
9.18.18   8:25 PM Markets

Where's the data? A snapshot of Wendy's on National Cheeseburger Day

In honor of National Cheeseburger Day, we take a big bite out of Wendy's data to see where it focuses its store locations.

September 18 marks National Cheeseburger Day, but customers at Wendy's ($WEN) have had multiple reasons to celebrate this juicy holiday since September 8. That is thanks to a promotion that offers a free Dave's Single cheeseburger every day until September 30 with the purchase of any item on the company's mobile app.

But where can potential customers cash in on a free cheeseburger? And what can we infer from where these burger joints are located? Of course, we have the data to help answer both of those sizzling questions. 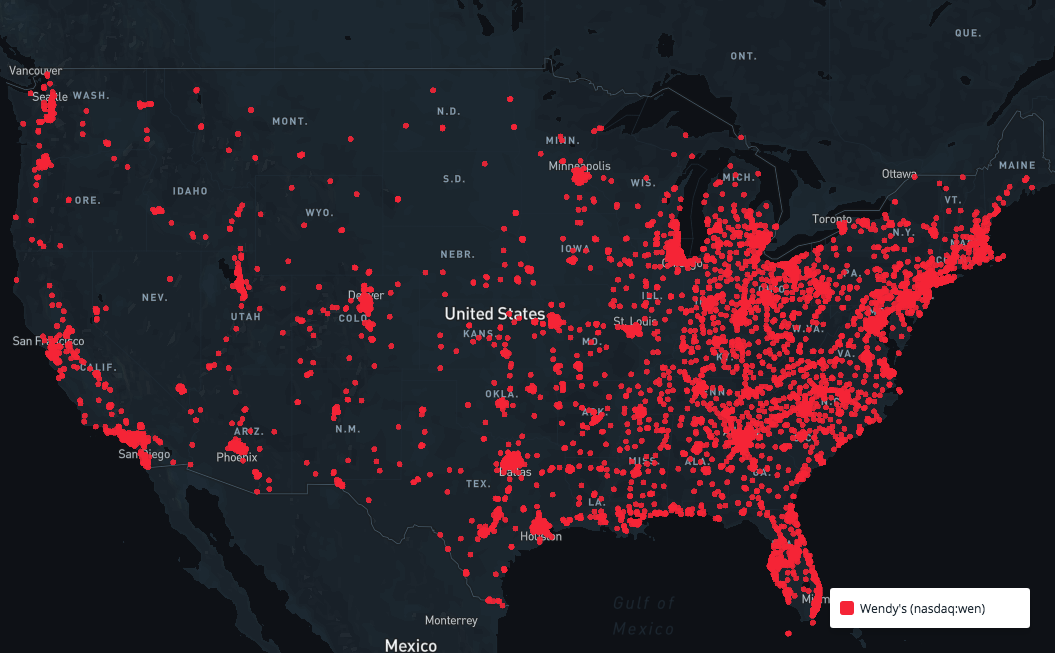 Because the burger deal only applies to Wendy's in the United States, it's best only to track locations in the U.S. Right now, there are 5,767 Wendy's across the country. Florida has the most Wendy's out of any state with 507 stores, and is home to three of the top five cities — Miami, Jacksonville, and Orlando — with the most Wendy's locations.

Surprisingly, the city where Wendy's was founded — Columbus, Ohio — ranks third in total store count behind Houston, a mecca for fast-food places, and Miami, Florida. In fact, its original location, opened on November 15, 1969, was shut down due to declining sales in 2007.

Also of note is New Jersey, the home state of Wendy's founder Dave Thomas, having the 14th most stores out of the 50 states plus Washington D.C.

Square patties vs. the Big Mac

While seeing the exact cities and states with the most Wendy's locations is interesting on its own, looking at where it stacks up against its main competitor, McDonald's ($MCD) paints a telling picture of its retail strategy.

Like other fast food restaurants, most Wendy's locations are franchise based, meaning that someone with $2-3.5 million can apply to build a Wendy's and open it up anywhere in the United States. However, Wendy's does offer "site selection assistance," and part of the franchising process involves location approval from the company.

Wendy's has far less restaurants than McDonald's in the country, specifically 5,767 against the Golden Arches' 13,965 locations. Although these two are national competitors, they are not in too much competition on a local level. 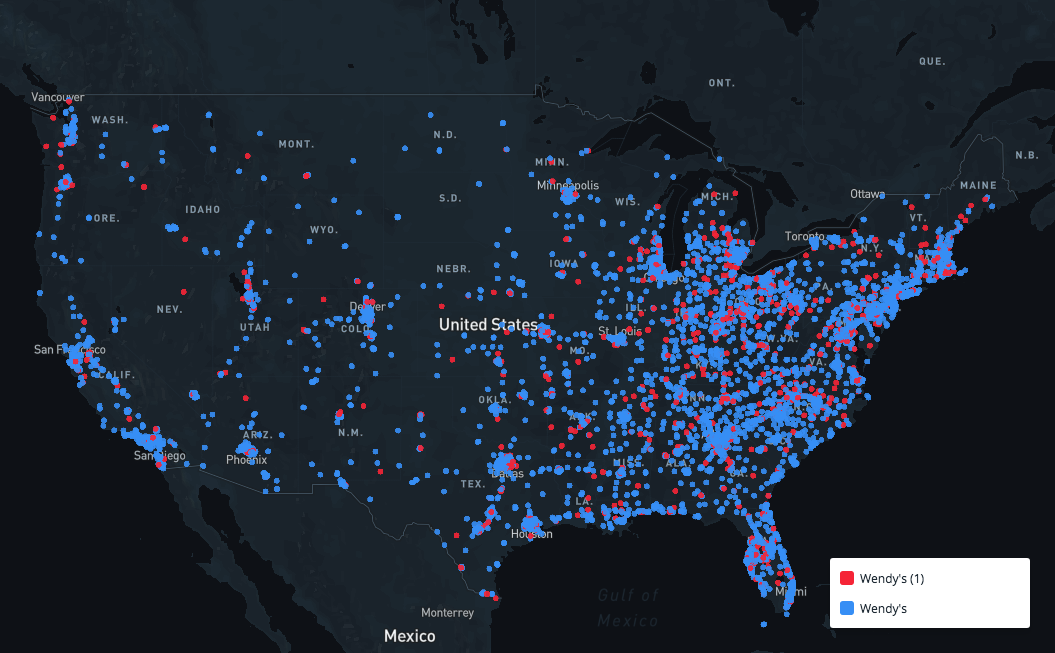 In terms of a half-mile radius, or a few minutes on the road to the next drive-thru, local competition increases, but there is still a sizable chunk of Wendy's that stand alone. While 54.5% of Wendy's have at least one McDonald's location nearby (represented by Wendy's (1) on the next map), 43.37% of them have zero Golden Arches near them. 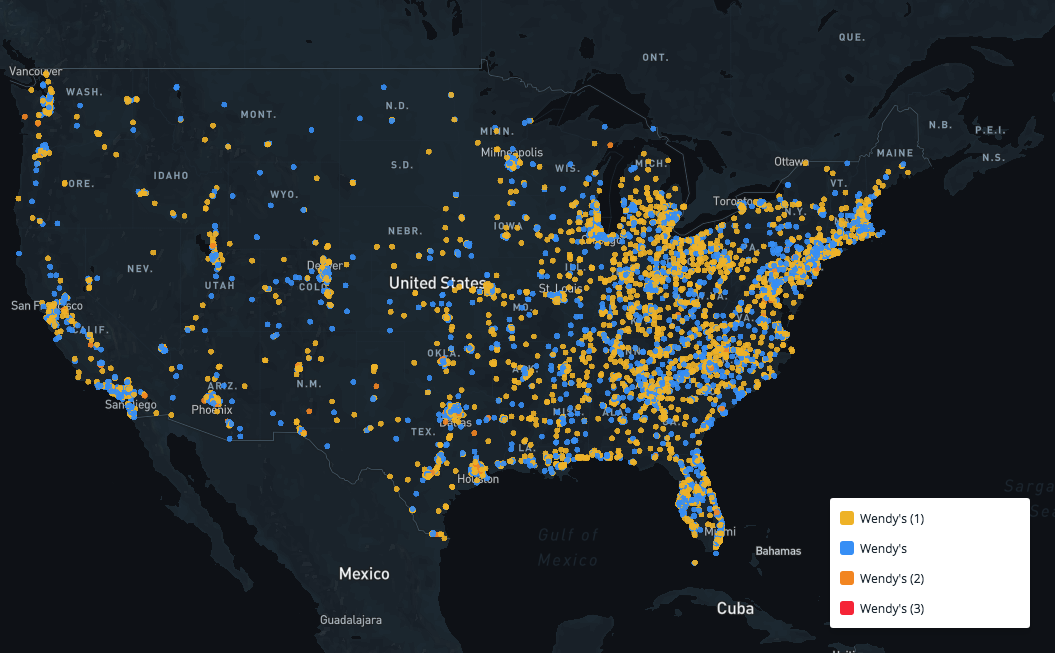 Almost all of the six Wendy's with an extreme amount of competition — at least four McDonald's — within near-driving distance are located in Manhattan, with one outlier in the heart of Boston. One Wendy's location, at 335 5th Ave. right near the Empire State Building, has the most local competition with nine McDonald's within a half-mile radius. 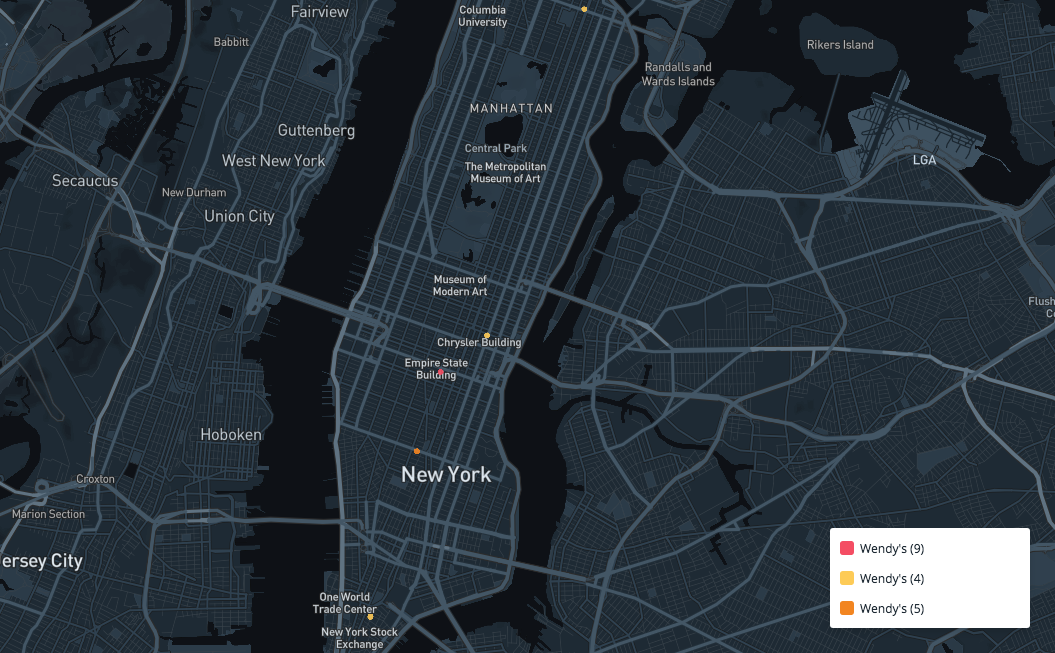 Although there is a large chunk of Wendy's near its main competitor, it seems that the restaurant tends to be in areas where McDonald's are less frequent.

Deep fried demographics: the median income of neighborhoods with Wendy's

Another indicator of Wendy's' location strategy is to look at the customers it serves.

The average median income for a Wendy's location is $69,119.99 when looking at the 5,586 restaurants tracked with zip code data. This is over $10,000 more than the average median income in the United States in 2016, but still within the middle class income bracket. Sorting all Wendy's locations by median income data also reflects a tendency to open franchises in middle class neighborhoods, with more restaurants located in poorer neighborhoods than in wealthier ones.

For direct comparison's sake, the average median income for a McDonald's restaurant location is $68,870.89, while the same metric for Shake Shack ($SHAK), a higher-end burger restaurant based in New York, is $106,871.17.

The neighborhood with the highest median income and a Wendy's is Bellaire, Texas, regarded as the "richest town in Texas." On the other extreme, two zip codes in Cincinnati, Ohio with a Wendy's have an average median incomes of $12,466 and $13,828.

As an aside, Wendy's is also known for being one of the sassiest fast food accounts on Twitter. Its unique style of how a brand should act on social media gave the company extraordinary Twitter follower count growth since the beginning of 2017, with the occasional outbreak in net followers coinciding with some of its positively savage Tweets.