The ambitious, bold and hungry start their week with The Business of Business!
Markets
12.14.18   7:23 PM Markets

America's retail landscape: mapping where we shop and eat

Every wonder where all of America's retailers, restaurants, and malls are? Wonder no more. instead, take a look.

The American dream and the American retail store go hand in hand. Open a shop, make a profit, buy another shop, rinse, repeat, buy a home, franchise, and you're winning. Mention America's most successful companies and you'd be hard-pressed to not mention McDonald's, Walmart, Starbucks, or even Sears.

They have one major thing in common: retail outlets to which Americans swarm and spend their money. As we head into the final week of Christmas shopping, we take at look at where American retailers do their business.

The map below is a snapshot of the United States with the locations of 7,300 businesses mapped out (click for a larger version). 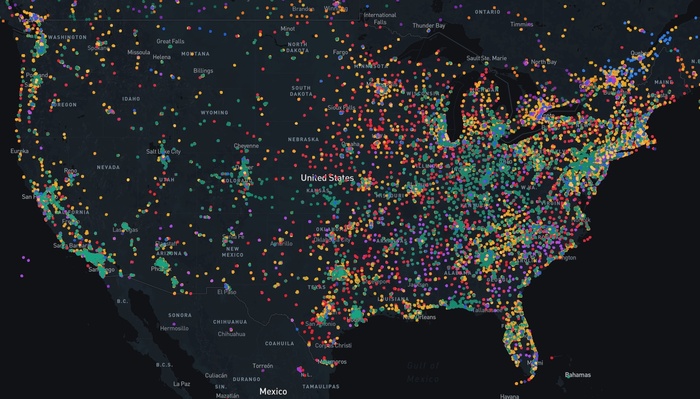 As far as cities that have the most retailers (keep in mind this also includes everything from wi-fi hotspots trying to cash in on your Facebook addiction to e-cigarette dealers at the corner bodega), New York tops the list, followed by Los Angeles and Chicago.