The ambitious, bold and hungry start their week with The Business of Business!
Markets
8.7.18   1:45 PM Markets

Here are the largest shopping centers of America, and who owns them.

The shopping mall is steeped in multiple layers of Americana. At once it's both capitalism and ingenuity manifest: from the massive department stores that occupy hundreds-of-thousands of square feet to the gift shops that somehow survive on cheap sunglasses and greeting cards. At the same time, the American mall is a symbol of adolescence, the setting for coming-of-age movies and beloved love stories. It's also a large part of the American childhood as the place where kids tell Santa what they want for he holidays and to where parents return to make good on promises. In short, it's an American institution, take it or leave it.

And Americans are, by some analysts' estimations, leaving it, as consumers increasingly turn to the internet and discount big-box stores for their shopping needs.

Saturday at the mall could one day be a thing of the past.

But until that happens — if that happens — a look at the current state of the American mall provides a fascinating snapshot of just where our retail takes place, who owns it, and how much of it they own.

The map below covers data for 21 of America's largest REITs, or Real Estate Investment Trusts. These are the landlords of retail in America. Their circle circumferences in the map represent relative square footage. 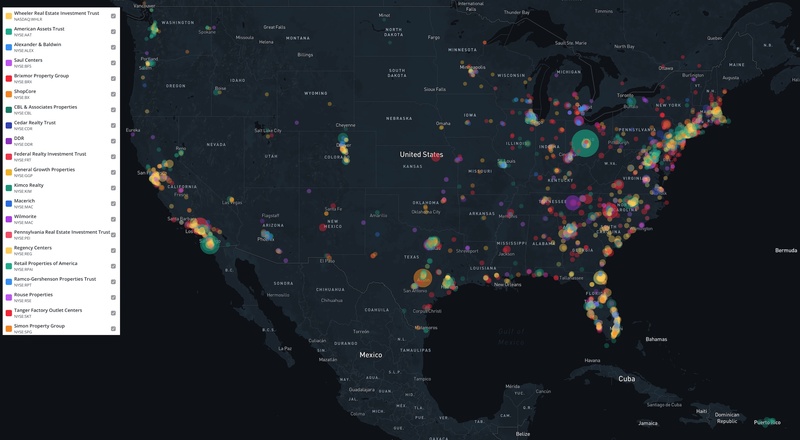 For a larger version of the maps in this story, click the image. For subsribers who want to see the map in its full glory and see the data, click here.

Breaking out the standouts 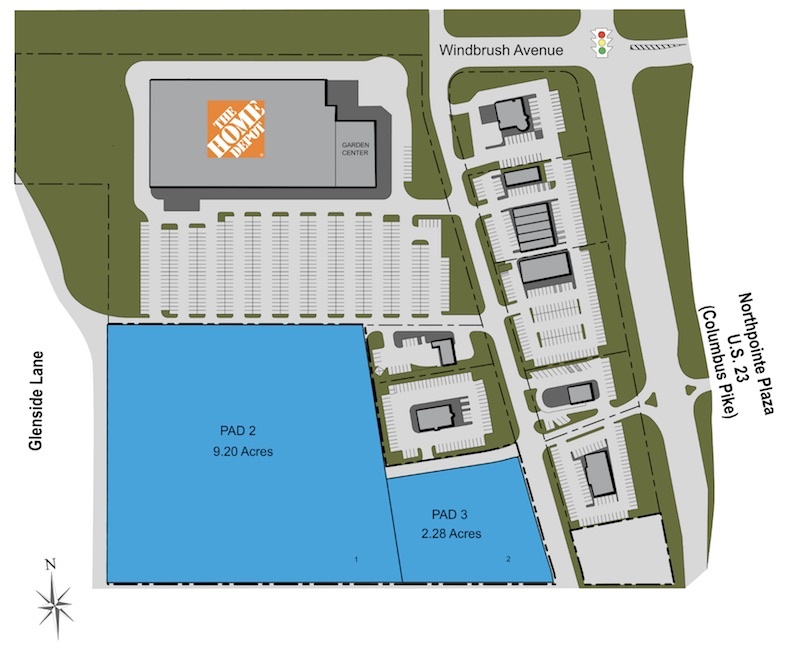 The large orange area over Austin, Texas represents ShopCore Properties. This REIT, headquartered in Chicago, is part of Real Estate-giant Blackstone ($BX), and as of publishing, is landlord to 24-million square feet of leasable space. The shopping center in Austin noted here is called Southpark Meadows. It's anchored by Bed Bath & Beyond, Best Buy, Super Target, and Walmart and comprises of almost 1-million square feet. 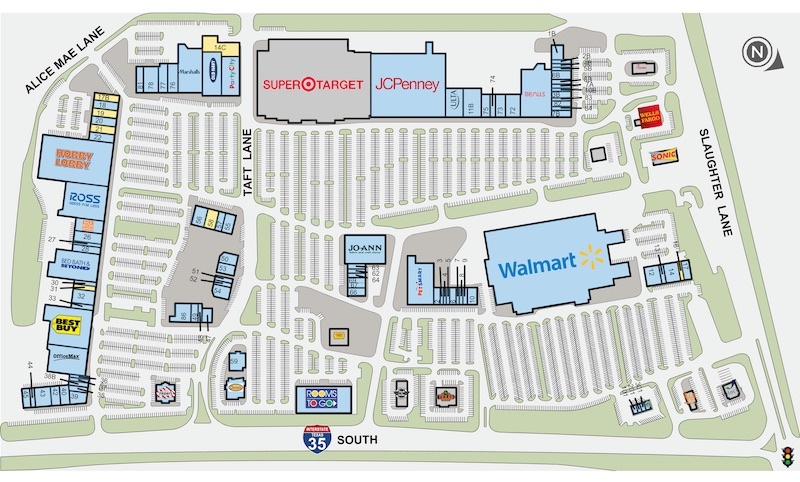 Zooming in on urban areas reveals that there aren't any real retail real-estate dominators, unless you consider the more remote, suburban areas. Those locations, home to discount outlets and more traditional malls, look a lot more like the rest of America. 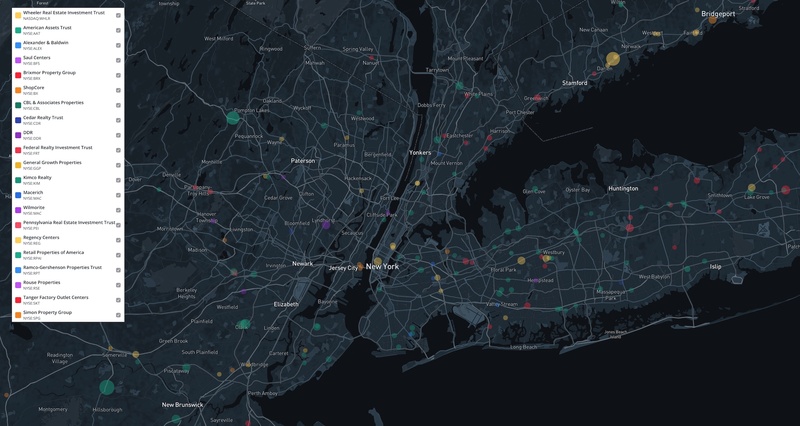 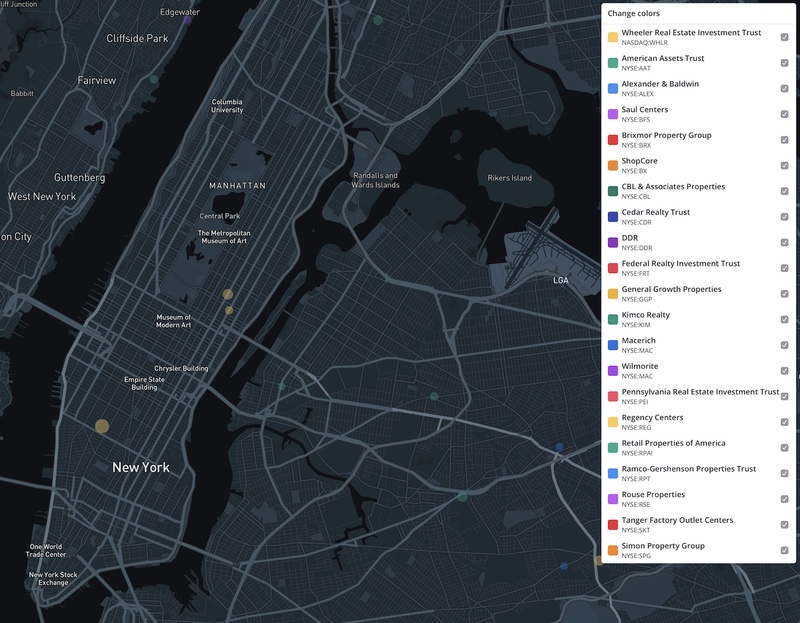 In the New York City area, Regency Centers ($REG) is the only standout, at least when mapped according to square footage. This REIT, headquartered in Jacksonville, Florida, tends to create shopping centers anchored by grocery stores. It currently owns 427 properties comprising of 59-million square feet of space. For instance, its retail unit at 1175 Third Avenue in New York City's Upper East Side is anchored by a Key Food grocery store. Above the store sits Trump Palace condominiums. 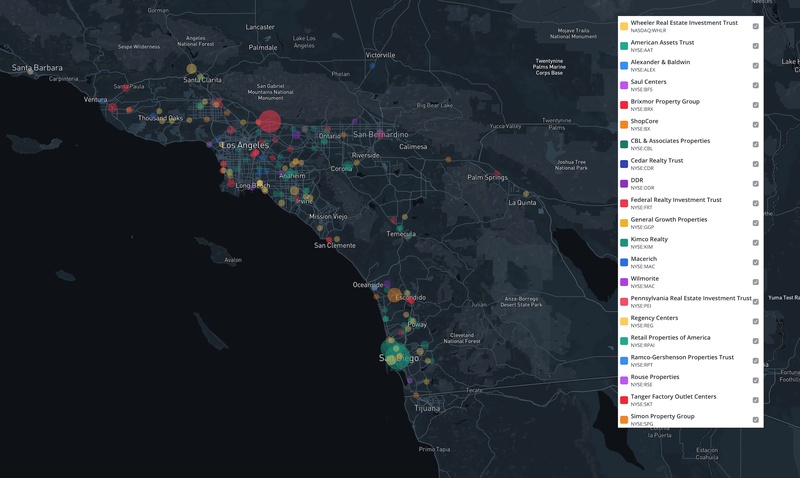 In the Los Angeles area, the aforementioned Kimco Realty dominates San Diego. But just outside of central Los Angeles, in the Pasadena area, Federal Realty Investment Trust ($FRT) makes itself known with a large property represented here by a red circle. Federal Realty Trust, headquartered in Rockville, Maryland oversees 105 properties and 24-million square feet of retail space. This massive shopping center, anchored by a Marshalls and CVS, is one of the largest in the Los Angeles area.