The ambitious, bold and hungry start their week with The Business of Business!
Markets
2.8.22   10:35 PM Markets

The e-commerce giant’s job postings have risen by nearly 50% over the past six months, according to data from Thinknum.

If anyone needed definitive proof that the job market is more competitive than ever for employers, Amazon provided it this week. The e-commerce giant is reportedly doubling its maximum salary for office workers to $350,000, an increase that company management viewed as necessary for attracting tech talent.

In some ways the move comes as no surprise. The U.S. economy came roaring back as the pandemic waned, bringing the number of open jobs in the country to nearly 11 million at the end of December. Payrolls rose by a bracing 467,000 in January, according to the Bureau of Labor Statistics, well ahead of a consensus estimate of 150,000.

Seattle-based Amazon, the second-largest U.S. employer, is also trying to fill a record number of open positions, especially as it seeks to build up technological capabilities and expand corporate operations. Long assailed for low wages and poor conditions in its warehouses (where workers won’t be impacted by the corporate salary cap bump), the company has also not generally been ranked among the highest-paying for positions higher up in the ranks. But that may be changing now.

According to data from Thinknum, which collects information from public job postings, Amazon is currently hiring for about 84,400 jobs in its corporate operations. That number, the highest by far over the past four years, is up nearly 50% from six months ago. 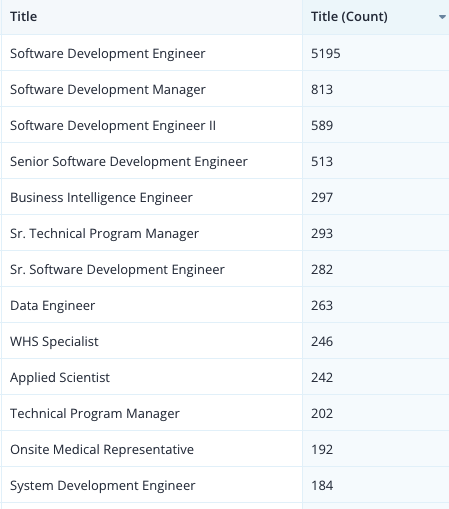 There are also some more intriguing positions, including a long list of robotics-related roles. Those included a “human factors & ergonomics engineer,” as well as robotics business intelligence engineers, an internet-of-things robotics architect, and a software development manager for the “robotic navigation team.”

Amazon has been increasingly developing robots to aid in logistics involving its packages, raising questions about whether it intends to replace its warehouse workers with robots. For now, the company has said it is aiming to use robots mainly to increase worker safety and take on more strenuous tasks. 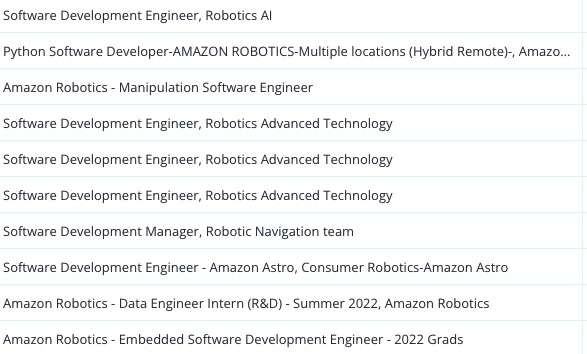