The ambitious, bold and hungry start their week with The Business of Business!
Markets
5.25.21   3:32 PM Markets

Shout stain remover in 22-ounce bottles, normally priced around $3-$4, is being sold by online vendors for as much as $11.91 each.

Harkening back to toilet paper and hand sanitizer shortages early in the pandemic, a similar thing seems to be happening with the laundry stain treatment Shout.

The product, usually a staple in homes across the U.S., has reportedly been disappearing from store shelves. Meanwhile, it’s showing up on Amazon and eBay, listed by independent vendors, for sale at as much as three or four times the normal price — and possibly marked up even higher. 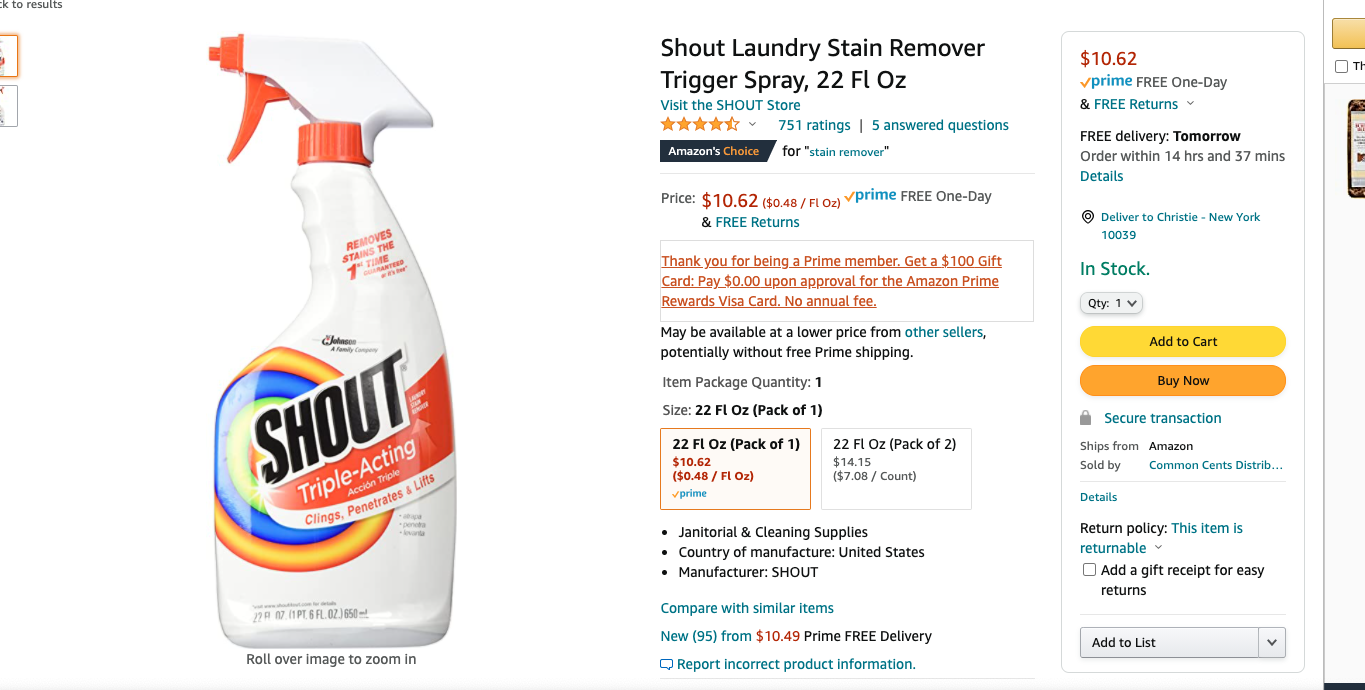 Three months ago, a Reddit user noticed the oddity. “What is going on with Shout Stain Remover,” the user asked in a post. “My husband and I tried to buy Shout the other day, but the store was all out. No big deal. We went again and still out of stock. Weird but whatever. Then every store we went to had no Shout. Now I’m trying to find it online, and everywhere is sold out of it, even the bigger bottles. The normal sized bottles are going for like $30 on eBay.”

Similar dynamics appear to have affected competing products Spray ’n Wash and OxiClean, although to a less dramatic extent. Shortages may have only been temporary, though. Currently, the products are not listed as “out-of-stock” on websites for retailers such as Wall-Mart and Target. A a 22-ounce bottle of Shout, however, typically priced around $3 or $4, is still going for $10.62 on Amazon and $11.91 on eBay. 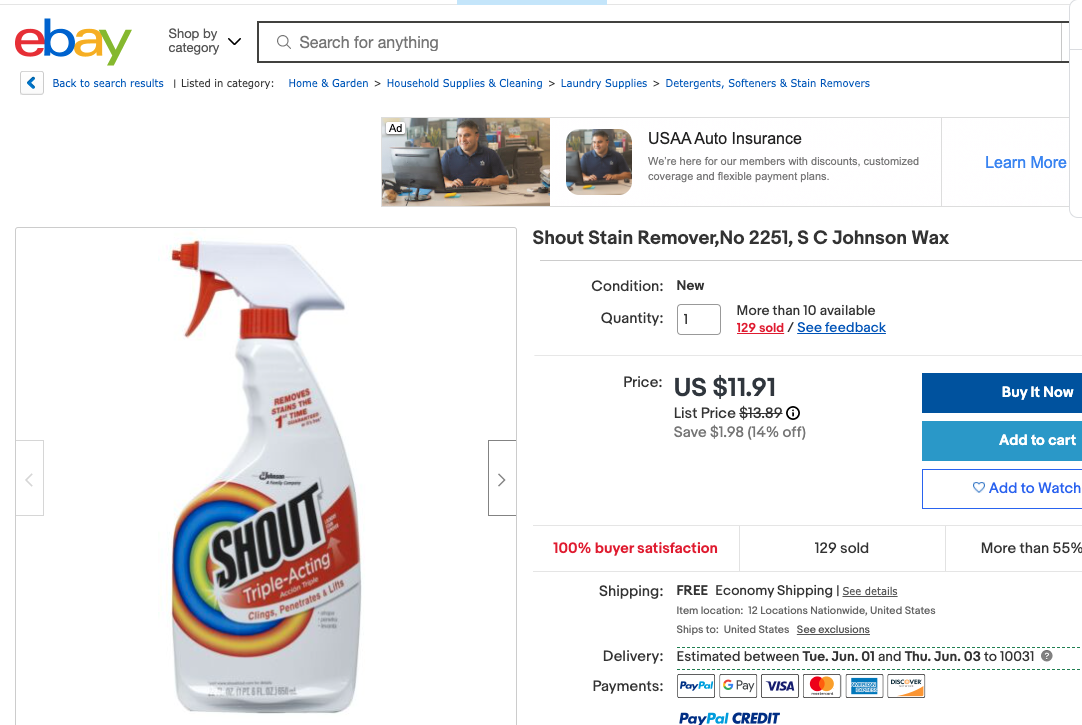 It’s anyone’s guess why stain remover is suddenly becoming a hot commodity. Maybe in anticipation of heading back to the office, Americans are finally washing long-neglected piles of soiled work clothes. Maybe SC Johnson, the maker of Shout, inhibited its ability to meet demand by shifting some of its production capacity to making hand sanitizer last year. (A company representative did not respond to a request for comment on the matter.)

There is also the issue of a global supply crunch. We all were briefly riveted by supply chain snafus when container ship the Ever Given was stuck in the Suez Canal this spring, but the greater problem of a mismatch between the economies of the U.S. and the countries where it sources its materials still afflicts us. In fact, according to a Bloomberg article, it is likely getting worse.

Supply chains are on the verge of seizing up amid a massive influx of demand for virtually everything, from lumber, to plastic, to metals and agricultural products, Bloomberg reported. Monster Beverage Corp. is struggling to find enough aluminum cans for its energy drinks. Semiconductors, used in all sorts of consumer devices, are also getting hard to obtain.

All of these signs point to an increase in inflation, as well as continued product shortages, and excellent conditions for vendors looking to scalp things online. During the run on toilet paper last year, complaints abounded about price-gouging both by retailers and third-party sellers on websites such as Amazon. Opportunists were also in full force in November, hawking much-sought-after Playstation 5 and Xbox Series X game consoles, normally priced around $300 to $500, for thousands of dollars.

Both Amazon and Wal-Mart Marketplace allow third-party businesses to sell products on their sites, while eBay also provides a platform for independent sellers. Generally, there are few restrictions on the prices these third-party vendors can charge, and prices can shoot up in times of scarcity. Dynamic pricing based on algorithms which sellers can use may contribute to the effect.

Amazon does require that vendors agree to abide by a “fair pricing policy” which forbids sellers from setting a misleading price, or charging significantly more for an item than what it has been offered for recently on the site. State and local laws against certain levels of uncharging in times of crisis might also come into play.

The company said in March 2020 that it suspended 3,900 accounts over fair pricing violations, adding that it is “working vigorously to combat price-gouging” by “aggressively removing bad actors and offers,” among other actions.

Scalping continues to be rampant, however, at least according to complaints posted by consumers on Amazon.

“Scalpers are ruining the market,” one user lamented in February 2021. “Right now products like Nvidia 3080 graphic card that is worth $699 is now being sold on Amazon for $2,399.99. I can’t believe Amazon is letting products like this stay up on their website front page with good buyer reviews from the same scalpers who are selling products like this.”

Another user in January 2021 posted: “This is not an easy issue. Scalping is not illegal, but it is terribly wrong, and I don’t like seeing Amazon condone this. Although it might not be easy for them to clamp down I absolutely agree with those asking for MSRP to be posted.”

One user asked a seller offering high-priced Shout, “why is this so expensive? It’s $2.99 in Walmart!”

The seller replied: “Hi Dem, many people prefer to pay more and have the convenience of receiving the product at home, without the risk of viruses, without the expenses of gasoline, transportation, without wasting time, among other advantages.”