The ambitious, bold and hungry start their week with The Business of Business!
Features
3.11.22   8:03 PM Features

From feel-good stories in Ukraine to simmering tensions in Israel, Airbnb keeps finding itself in the middle of geopolitical struggles.

Airbnb co-founder and CEO Brian Chesky had always envisioned the company as the 21st century version of the time in America when generous strangers would rent their homes to weary travelers looking for a hot meal and a place to crash for the night.

“We really believe…that through the sharing economy we can bring back the community atmosphere,” he once said.  At the same time, Chesky noted “there will be unintended consequences.”

Now that Airbnb has rapidly expanded across the globe, Chesky’s gentle, nostalgic vision of American hospitality has clashed with the realities of a chaotic, messy world. The company has unexpectedly found itself smack in the middle of geopolitical and religious conflicts dating back hundreds, even thousands of years.

Recently, people have been using Airbnb as a way to help beleaguered Ukrainians survive Russia’s invasion of their country. Instead of donating to traditional relief organizations, global users of the platform have been booking millions of dollars worth of rooms across the country to put money directly into Ukrainian hands.

At the same time, human rights organizations have fiercely condemned Airbnb for listing homes in Jewish settlements of the occupied West Bank in Israel.

“These settlements are a war crime under international law,” said Saleh Higazi, an official with Amnesty International. “Airbnb needs to do right by investors and stop benefiting from illegal settlements built on stolen Palestinian land in the Occupied Palestinian Territories.”

For many people, home is not only property but a refuge of safety and comfort. Home also signifies identity and sovereignty, which often leads to conflict — as Airbnb has found out.

Being thrust into the middle of ongoing conflicts hasn't been easy for the company to navigate. At times, AirBnb has been able to position itself as a force for good, but in other situations it has simply faced PR disasters and condemnation from all sides.

“Please book my apartment if you want to help Ukrainians”

Russian forces invaded Ukraine on Feb. 24, hoping to establish control over a former Soviet Republic that has drifted toward Europe. President Vladimir Putin asserted in a speech that Ukraine was historically part of Russia and questioned its sovereignty.

As bombs fell on Kyiv, Odessa, Melitopol, and other cities, a movement emerged on social media to get money directly to Ukrainians by booking their homes on Airbnb.

“Told them that I’m not coming but that I hope it would help a little,” a woman said in a widely shared social media post. 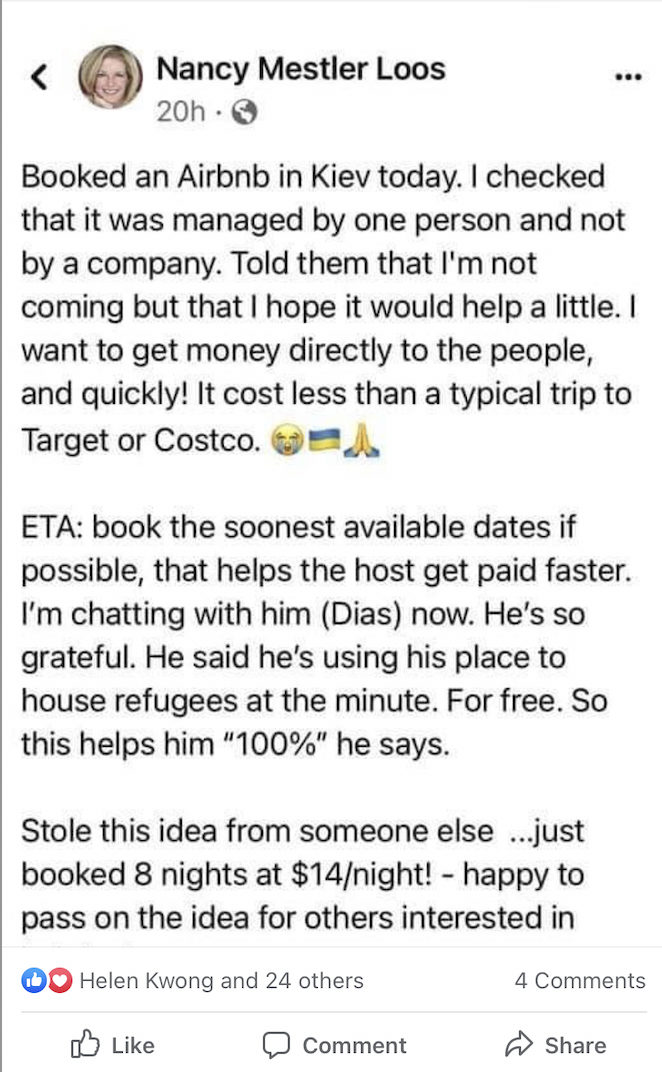 Soon Ukrainians picked up on the campaign.

Serhi, who rents an apartment in northwest Kyiv, made this plea on his confirmed Airbnb listing:

“Russian army attacking and bombing…Kyiv. My family does not have the opportunity to work, we need money to buy the most necessary. Please book my apartment if you want to help ukrainians. This money will help us to survive the war."

As it turns out, Airbnb was already launching its own massive effort to help Ukrainian refugees.

The company, which is partnering with prominent relief organizations like Care and the International Organization for Migration, said it would fund efforts to provide short term housing to 100,000 refugees, including Eastern Europe countries like Poland, Romania, Moldova, Hungary, and Slovakia.

Airbnb also said nearly 30,000 people signed up to offer their homes to refugees across 160 countries around the world, including more than 10,500 in the United States. The company also received more than $1.2 million in donations.

A spokesperson for Airbnb said the company was aware of the grassroots effort to book apartments in Ukraine.

"We are so humbled by the inspiring generosity of our community during this moment of crisis," the spokesperson said, noting that Airbnb was temporarily waiving booking and hosting fees in the country.

War, land and a displaced people

Much of the world, led by the U.S. and Europe, seems fairly united against Russia's invasion of Ukraine. The same can't be said for the Israeli-Palestinian conflict.

And Airbnb's incoherent response to its involvement has been nothing short of disastrous.

Fighting over ancient lands crucial to Judaism, Christianity, and Islam goes back thousands of years. But the current conflict dates back to 1948 when the founding of the modern state of Israel forced the displacement of millions of Palestinians, who still lay claim to the land they fled.

Then in 1967, Israel defeated a combined Egypt-Jordan-Syria attack and captured the West Bank, Gaza Strip, and Golan Heights. Though Israel eventually left the Gaza Strip, the country still controls the West Bank, and thousands of Jewish settlers have built homes in disputed territory there.

"Any basic preliminary risk assessment by the companies would reveal that any business activity in or with settlements would unavoidably contribute to sustaining an illegal situation," Amnesty International said in a 2019 report. "Their promotion of Israeli settlements in the (occupied territories) as a tourist destination also has the effect of 'normalizing,' and legitimizing to the public what is recognized under international law as an illegal situation."

However, Jewish settler groups claim the land has historically belonged to Israel, and several Israeli and American governments have supported the settlements. They argue a global campaign known as the Boycott Divest Sanction movement — which urges companies and investors to severe their ties to Israel and the settlements —  amounts to anti-Semitism.

At first, Airbnb was unsure of how to deal with the problem. The issue is complex, Airbnb said, and “a hospitality company from San Francisco isn’t going to have all the answers.”

The company eventually did pull its listings only to reverse its decision after settlers sued Airbnb as it neared its IPO in 2020. As part of the settlement in the suit, Airbnb said it would donate all booking fees from the settlements to humanitarian causes.

"Airbnb has never boycotted Israel, Israeli businesses, or the more than 20,000 Israeli hosts who are active on the Airbnb platform. We have always sought to bring people together and will continue to work with our community to achieve this goal," the company said at the time.

As you can imagine, Airbnb's flip flop didn't placate its critics. Amnesty International called it a "shameful change of heart."

Airbnb’s stated mission is to create a sense of global community.

"Looking back over the past 13 years, we have done something we hope is even more meaningful: we have helped millions of people satisfy a fundamental human need for connection," the company said in its pre-IPO filings. "And it is through this connection that people can experience a greater sense of belonging."

But when it comes to fundamental things like homes and land, such high minded intentions can run into harsh realities, as the situations in Ukraine and Israel demonstrate.