The ambitious, bold and hungry start their week with The Business of Business!
Tech
2.9.18   1:40 PM Tech

It's the Internet's hottest, most viral game. Do you love HQ Trivia, hate it, or wonder what the fuss is all about?

HQ Trivia - the game everyone loves to hate. From 8000 daily users back in October to more than a million last week, the game grabs America's undevided attention twice a day. But Americans ARE divided over the game - everyone either loves it or hates it, and with conservative billionaire bogeyman Peter Thiel investing, the haters may be in the ascendancy.

The trouble didn't start with Thiel, though, and it probably won't end with him and the $15 million he brings to the table.

HQ Trivia ($PRIVATE:HQTRIVIA) started as the brainchild of the bros who brought you Vine - the cute little video app that flourished for a short while, then withered two years ago (more on them in the next section). With pub trivia nights taking off, it seems like a natural: Combining all the gameshow excitement of Jeopardy and Who Wants To Be A Millionaire with the social aspect of a pub game, all in the immediacy of your handheld device. Friends could play together, 400-pound loners could play it in the basement in New Jersey (thanks, Trump!), plus there was the chance for cash prizes! 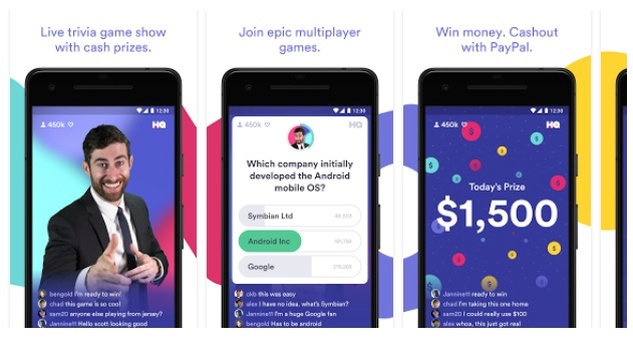 What could go wrong?

As happens so often with overnight success, everything. The game worked great when 1000 people were playing it. With a million+ overloading the system, it got glitchy. It froze up. It kicked you off. If this was Candy Crush you'd shrug it off, but you can't just restart - HQ Trivia runs live, and only two times a day, so if your phone glitches out as you're answering "Who invented the electric toaster?", you're toast. 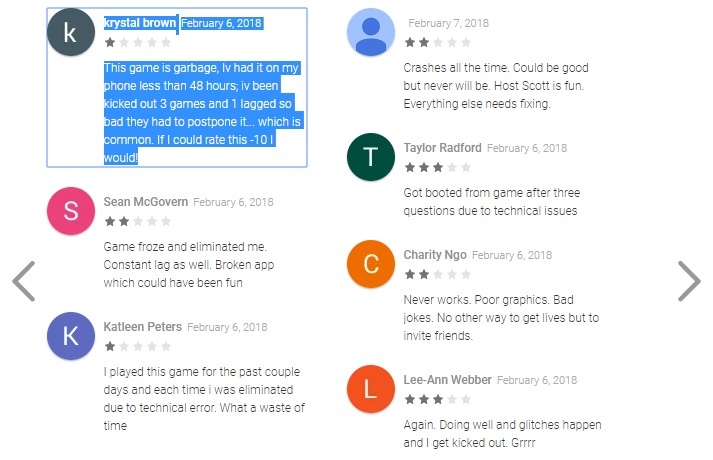 The founders knew they had to build on their success, raise a quick round of financing, and patch up the holes, and quick. They sought venture capital, hoping for a valuation of $100 million. And that's when people remembered just who these guys are.

[Kroll] was fired from Twitter for being a bad manager just 18 months after the company acquired... Vine, according to three people with direct knowledge of the situation.

Separately, he also earned a reputation while working at Vine for exhibiting “creepy” behavior toward women that made them uncomfortable, according to numerous former colleagues, a reputation that is hurting HQ’s fundraising efforts.

Wagner says all of that ugly behavior spooked several big investors during the due diligence phase. Not liking what they found, they walked away. "A second investor ... described Kroll’s behavior as “egregious,” but declined to elaborate," Wagner added.

Wagner adds that Yusupov and Kroll's business behavior was egregious as well, which is why, after aquiring Vine, Twitter ended up folding it rather than integrating it. "Kroll, Yusupov and third co-founder Dom Hofmann were fiercely independent and resisted any kind of efforts to link the two companies, even culturally, sources say."

For a while there it looked like they weren't going to get any money at all, and the glitches got worse.

But they finally found salvation in the figure of a billionaire investor, although as far as many are concerned, he's no angel.

Peter Thiel got his first big boodle by founding PayPal, then selling it to eBay in 2002; his latest venture is the creepy big data/big brother analytics company, Palantir Technologies.

Thiel, a venture capitalist, PayPal co-founder and early Facebook investor, was also one of the few tech elite to support then-candidate Donald Trump in his campaign for president. He funded the court case that led to the demise of the beloved Gawker media, and, by some accounts, he believes that the key to everlasting youth might be through blood transfusions with young people.

So when Thiel the conservative bogeyman got into bed with the womanizing Vine founders, it kind of created the perfect storm.

Enter Huffington Post senior reporter Ashley Feinberg. Her reaction to the Axis of Thiel: She nailed her "Delete HQ Trivia" thesis to the door of the Internet.

"And it is to those million people that this plea is addressed," she wrote. "Delete HQ from your phones immediately. Do it now or support a vampire plutocrat superintending the destruction of the free press, pluralist democracy and just about everything you claim to hold dear, unless you’re particularly against women’s suffrage."

"...deleting HQ is not going to strip Thiel of the billions of dollars he uses to further the hell world in which we find ourselves. There are, however, degrees of complicity, and it’s time to see Thiel on the same end of the continuum as, say, the neo-Nazis who thrilled to his open support for Trump. If you can ever avoid doing something that might help Peter Thiel, the world will be ever so slightly better for it."

So far, at least thousands have agreed with her.

Will this really impact on HQ Trivia? That remains to be seen....

It's hard to judge what, if any, success the movement has so far. Think Gaming tracks downloads and revenue, and so far it appears that after a brief downturn, HQ has returned to the top of the tier, logging in at #2 most downloaded free app twice this week, and sitting comfortably in the top 5.

HQ is still gaining a huge number of new players - Think Gaming tags them at 185,658 daily installs, but with a daily revenue estimate of a piddling $9,038 (in comparison, Candy Crush Saga, the #1 game in the universe, has 41,948 daily installs but $2.2 million in daily revenue).

Need an even better reason to #DeleteHQ?

But, as Brian Feldman points out at NY Magazine, HQ is not alone:

If you’re planning to swear off HQ in light of this Thiel-related news, you might also be interested in browsing some of the other tech properties that Founders Fund derives value from: Lyft, Spotify, Airbnb, and last but not least, Facebook. Best of luck with your ethical consumption.

And it's possible that HQ is facing an even bigger challenge: Arstechnica reports that Artificial Intelligence bots that can beat the game are starting to roll out.

To see just how much of a problem these question-answering bots can cause, look no further than the 3:45 HQ Trivia game on Tuesday, February 6. Of the 786,883 who started the game, a full 9,046 answered all 12 questions correctly, a number host Scott Rogowsky confirmed was a record. Each of those winners got a grand total of 23¢.

Want to beat Rogowsky and Thiel at their own game? Check out cheat site HQuack....