The ambitious, bold and hungry start their week with The Business of Business!
Features
3.9.22   9:06 PM Features

A return-to-work hurdle: Which states are hurting the most for daycare workers?

We examined job postings for KinderCare, the biggest for-profit daycare operator in the U.S., and came up with some answers.

For many workers in the U.S the care-free work-from-home days are coming to an end. Some people are rushing to update their wardrobes and anxiously creating carpool group chats. Others are facing the more daunting task of finding someone to watch their kids while they’re at work.

Save for the lucky minority able to afford a full time nanny, most people pray for an open slot at their local daycare. Many working parents are finding it increasingly challenging to find one as daycares struggle to keep up with demand.

Pandemic lockdowns of the past two years and the cost of enhanced health precautions drove many small child care centers out of business. Most daycare centers that continued operating suffered from reduced enrollment as parents worked from home. As a result, the childcare workforce shrunk by over a third in the first month of the pandemic and has still not fully recovered. The lack of job stability led to an exodus of early education workers from the profession, which has always had a reputation for high stress and low pay.

Now, as the pandemic threat recedes and demand for childcare rebounds, daycare centers are racing to recruit the limited number of workers that remain. Due to labor shortages in the wider economy, they are in competition not just with each other but also with employers in other industries. Many daycares are offering increased pay to staff and since wages make up the majority of their business costs, parents are presented with higher price tags. In early 2021, the average price of childcare was up 41% from its pre-pandemic levels.

Childcare labor shortages and the resultant daycare price hikes have wide reaching implications for the economic recovery. As daycare services become out of reach for many families, some parents (most often mothers) are forced to drop out of the labor force to stay home with their kids. The dynamic expands labor squeezes across industries and further exacerbates the already rampant inflation. Steep childcare costs eat away at families’ discretionary income, forcing them to limit spending on other things and curb their savings for the future.

We used data gathered by our parent company Thinknum to dig into which states have the most active childcare hiring (indicating steep demand for providers) and what positions they are most eager to fill.

We focused on job listing data collected from LinkedIn for KinderCare, the biggest for-profit daycare operator in the country. Our analysis includes the forty states where KinderCare operates. For each of those states, we calculated the number of KinderCare job openings per million residents. 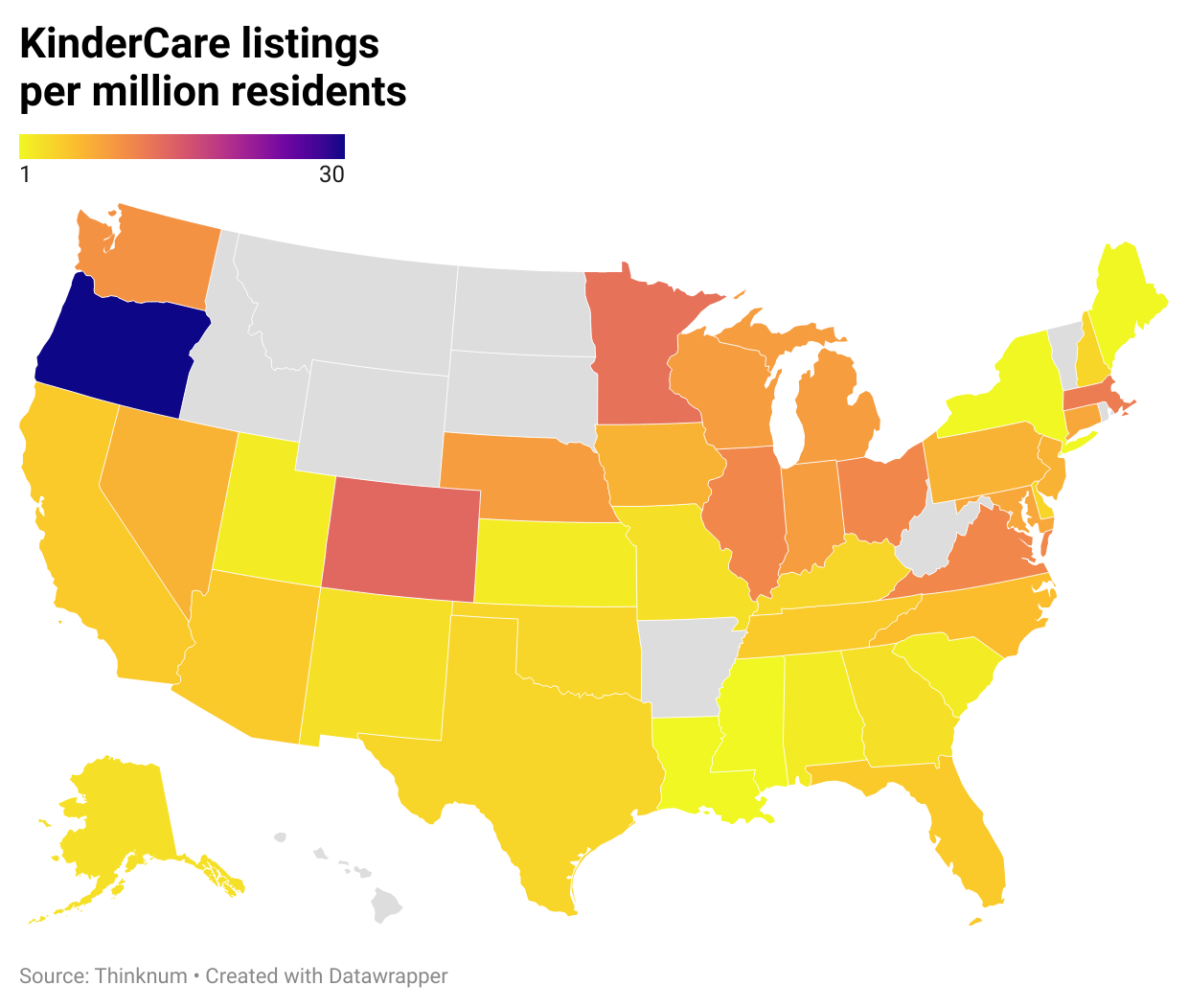 States with the most KinderCare openings per million residents

1. Oregon: KinderCare is most desperate to hire in Oregon with a total of 128 Linkedin listings. Parents in the state have been left reeling as it lost 15% of its daycare facilities in the two years preceding April 2021. An average Oregon family in the state can expect to pay over $10,000 for childcare for a 4 year old.

2. Colorado: KinderCare is mostly hiring teachers in Colorado, as well as some other professionals, with 78 vacancies across the state. The advertised salaries for a teacher range from $13 to $17 an hour. Coloradans pay north of $12,000 per year for 4-year-old daycare, which is above the national average.

3. Minnesota: KinderCare in Minnesota is looking to fill 76 open positions, searching mainly for teachers and administrators. Minnesota is facing a heavy childcare shortage with just one region of the state missing 4,800 childcare slots. The Land of 10,000 Lakes may soon have to rename itself to Land of $12,000 Childcare as that is the average annual cost of preschool in the state.

4. Massachusetts: The Massachusetts KinderCare has an acute need for early education workers with 85 job listings on LinkedIn. The Bay State still short 17% of the childcare workers it had before the pandemic. It is one of the most expensive places to send your offspring to daycare (second only to D.C). An average family in the state pays $15,000 for a year of preschool for a 4-year-old and a whopping $21,000 for infant care.

5. Illinois: The KinderCare in the Land of Lincoln has 140 active job listings on LinkedIn for daycare workers. Many of them have been up for weeks without getting a single applicant. Last year, the state directed $300 million in relief funds to childcare providers to help them recruit more staff. The program is aimed at expanding the availability of childcare and driving down costs for families. An average Illinois family pays more than $10,000 for preschool childcare.

6. Virginia: KinderCare has 94 active job listings on LinkedIn for a variety of positions across Virginia. It appears that the most desperate need is for early education teachers as evidenced by a $2000 sign-on bonus offered for some of the jobs.  Average Virginians pay almost $11,000 a year for a 4-year-old in preschool. This amounts to about 93% of the annual income for a minimum wage worker in the state.

7. Ohio: The state’s KinderCare has 129 open LinkedIn postings looking to hire mainly teachers but also administrators and cooks. More than three quarters of the state’s childcare facilities have a staffing shortage, and 76% blame the issue on low wages for staff. The average cost of sending a 4-year-old to preschool in Ohio is just under $8,000 a year, which is lower than in most other states.

8. Washington: KinderCare in Washington has 74 active LinkedIn listings. They are looking for early education teachers, as well as staff for their after-school programs. According to regional economist Dr. Anneliese Vance-Sherman, in June 2021, the childcare industry in the state was still missing 10% of the workers it had before the pandemic. An average Washington family with a 4-year-old pays more than $11,000 for a year of preschool.

9. Indiana: Multiple KinderCare locations across the state are looking to hire with 63 job listings on LinkedIn. A COVID vaccine requirement for many positions may be inhibiting the effort as only 54% of Indianans are vaccinated, which is well below national average. This does not bode well for lowering the costs of childcare in the state, which sit at over $9,500 a year for an average family with a 4-year-old.

10. Wisconsin: KinderCare’s Wisconsinians have a total of 52 job postings on LinkedIn. Wisconsin was recently experiencing a shortage of 120,000 childcare slots, which is impacting its economic recovery. The state plans to spend $351 million on the ‘Child Care Counts’ program, which aims to help childcare providers boost hiring. The average cost of childcare for a 4-year-old in the state is over $10,000 a year.