Truepill's co-founder discusses "founder market fit," cold-calling his future CEO on LinkedIn, the pitch deck that raised $39 million, and why telemedicine is here to stay.

“Truepill is what happens when you lock a software engineer with a pharmacist in a room for long, long periods of time.”

The software engineer and pharmacist in question — Sid Viswanathan and Umar Afridi, respectively — have been steadily building one of the largest B2B pharmacy startups for the last four years. Viswanathan, who serves as president of the company, first contacted CEO Afridi via a cold LinkedIn message.

“I messaged him just to get his thoughts on the pharmacy industry and what he'd seen, and that initial cold InMail on LinkedIn turned into several conversations back and forth over email over the next several weeks,” Viswanathan said.

Those conversations turned into Truepill. To date, the company has raised $113 million, and in September, it raised its latest round of $75 million in Series C funding. The company specializes in pharmacy fulfillment services for DTC healthtech startups like Hims and Hers, Nurx, and GoodRx, and has its own telehealth network which launched in July. When the pandemic hit, they saw accelerated growth as consumers preferred drugs delivered and telehealth to traditional services.

Most recently, Truepill has partnered with diagnostics startup Gauss to distribute at-home COVID-19 testing kits. The test, which will cost around $30, is awaiting emergency approval from the FDA, and will be distributed by Truepill, which already delivers other direct to consumer health products.

From LinkedIn to pharma

Despite Truepill’s success, Viswanathan was no expert on the pharmaceutical industry at first. A biomedical engineer by trade, Viswanathan’s route into healthtech took a few turns: after working for Johnson & Johnson, he caught the startup bug and founded a business card tech startup called Cardmunch, which he sold to LinkedIn in 2010. After staying at LinkedIn for a couple of years as a product manager, Viswanathan realized he wanted to focus on entrepreneurship again.

“I just wanted to go back to the drawing board,” Viswanathan told The Business of Business. “I learned what I could at LinkedIn and was ready to go back and do it again. That excitement of starting something again has fueled me ever since I started my first company in 2009. I guess it's just part of my DNA now.”

“People have experienced telehealth for the first time in the last 10 months, and there's no going back.” - Viswanathan

Without knowing exactly what he wanted to build, Viswanathan hit upon the idea of healthtech, leading him to look for an expert on the pharmaceutical industry. That expert was Umar Afridi, who received a message on LinkedIn out of the blue from Viswanathan. As their conversations became more frequent, the two met in person to discuss possible startup ideas. Afridi noted that much of the pharmaceutical industry was stuck in the last century — people were still going to pick up their prescriptions in person, and telehealth was still in its early stages — so the solution was naturally technology.

The little pitch deck that could 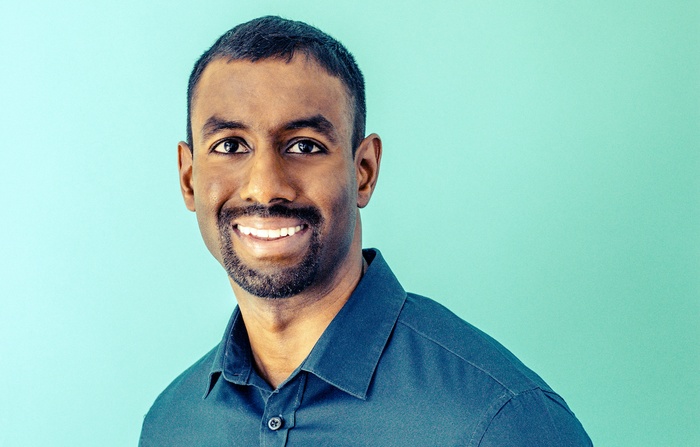 By the time Truepill got accepted into the Y Combinator class of 2017, Viswanathan and Ufridi had been bootstrapping their startup for a year and a half. According to Viswanathan, the fact that the company was already bringing in revenue helped its chances of getting in.

“Fundraising wasn't really top of mind for me or Umar at the time,” he said. “We really wanted to just get the mechanics of the business right, get some of the early infrastructure set up.”

Twice a year, Y Combinator holds a demo day where founders pitch their ideas to a group of investors and media. For Truepill, that meant crafting a concise two-minute pitch deck to illustrate their business. Their simple, yet effective deck persuaded Initialized Capital to lead their seed round. The deck has served them well ever since — to date, they’ve used it to raise $39 million in three separate rounds.

To raise money, the founders focused on what they’d already accomplished as opposed to future plans. “That was what we felt was our strongest narrative, that we had a lot of really good traction early on in our company's history and we wanted to let the traction speak for itself as we go on to raise,” Viswanathan said.

When the time came to raise funds after Y Combinator, there was no time to craft a more formal deck. According to Viswanathan, the two-man team was too busy getting orders together, with Ufridi filling out prescriptions and Viswanathan packing and labeling boxes to be shipped out.

“I think our traction allowed us to raise what we needed to at that point and served us really well,” Viswanathan said. “We just continued to focus on that. We believe if we can execute on the business and show the traction of it, that would help us get over the hump on any fundraising goal. That allowed us to raise our Series A as well as our B with a very spare pitch deck.”

The rise of telehealth during COVID

Today, the two-man team has grown to a 500-person company, and revenue has only increased in 2020, in part due to the pandemic forcing consumers to turn to online health services. This year’s Q2 was Truepill’s best ever, and Q4 is shaping up to be better still, with an estimated $200 million in revenue coming in for the entire year. For Viswanathan, the accelerated growth and shift to telehealth was his company’s “I-told-you-so moment.”

“We are positioning our company to be that infrastructure platform that can move all of healthcare into a digital world to the best extent possible,” he said. “We think the three most important pieces of that are certainly the diagnostics, telehealth, and pharmacy. COVID has been really good for everyone in healthcare. If you're in healthcare, this is the time where you find that elusive pandemic market fit or product market fit, whatever you want to call it.”

After facing years of bootstrapping, keeping up with growing demand, and scaling up during the pandemic, Viswanathan has learned some valuable lessons, like the importance of what he calls “founder-market fit.” Truepill, he says, was a perfect example of that: Ufridi was an experienced pharmacist before co-founding the company, while Viswanathan had experience in tech and had already founded a startup.

“Truepill is what happens when you lock a software engineer with a pharmacist in a room for long, long periods of time.” - Viswanathan

“I always advocate for making sure your founding team, whether it's two people or three people, you have all the skill sets on the team to go to market completely on your own without third-party dependencies and help on other hires before you go to market,” he said. “So, that's one thing that I've always been a big believer in, and I think we lived it through the founding stages of Truepill.”

Viswanathan’s other lesson is to play the long game as an entrepreneur. According to him, it takes two to three years to gain a deep understanding of the industry you’re in. For Viswanathan, being new to the pharmaceutical industry meant a steep learning curve. Despite that, he says the only way for him to learn was to jump in.

“If you pick really big markets like healthcare or pharmacy, you have a chance to flex into something much bigger than the initial seed that you planted,” he said. “That's certainly been the case for us, where the initial seed we planted was pharmacy, but clearly we saw the opening for why adding tele-health and diagnostics really allows us to tackle not just pharmacy. Pharmacy alone, by the way, is a $450 billion industry.”

Now that Truepill is helping with the COVID testing kit rollout, Viswanathan sees a bright future ahead for telehealth. Even after the pandemic is over, he says, consumers will still rely on companies like Truepill for the foreseeable future.

“Although we were seeing that happen even prior to COVID, now many people have experienced telehealth for the first time in the last 10 months, and there's no going back,” he said. “For us as a company, it creates this tremendous opportunity.”