Daniel S. Loeb is the latest billionaire to join Twitter, and he’s already got the hang of it.

Loeb, who managed to hold out on joining the social media site until last month, is the founder and CEO of New York-based hedge fund Third Point. He’s also known for his activism and philanthropy, founding the Margaret and Daniel Loeb Third Foundation, which supports Alzheimer's research, education reform and LGBT rights. And although Loeb writes op-eds on everything from business strategy to philanthropy, Twitter is an entirely unique medium. 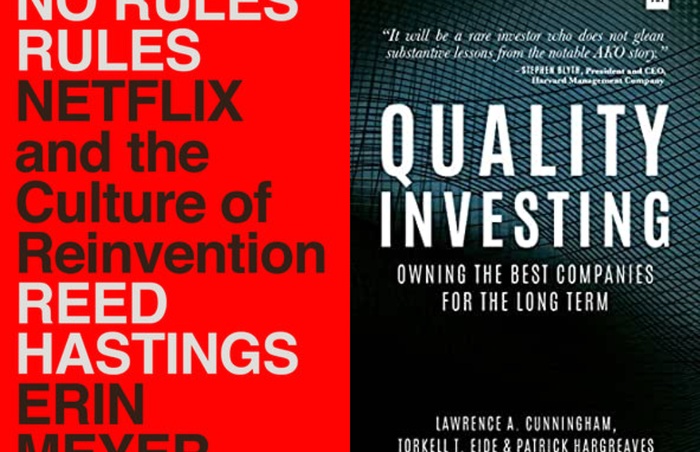 Some of Loeb’s first tweets were recommendations for his favorite books, including “No Rules Rules,” Reed Hastings’s memoir on streaming empire Netflix, and “Quality Investing: Owning the Best Companies for the Long Term,” which Loeb says is “mandatory reading” at Third Point. On “No Rules Rules,” Loeb said in his tweet that he “took away some lessons on innovation culture, how to give/receive feedback and talent,” and that he highly recommends the book.

Books aren’t the only things Loeb recommends. “The Queen’s Gambit,” a Netflix TV show, has recently gained attention from critics and fans alike, including Loeb.

In one of his more colorful tweets, Loeb shared a 1999 BBC interview with David Bowie which had already garnered 2.9 million views. In it, a middle-aged Bowie explains that the World Wide Web would soon grow into something bigger, allowing for users to have more control over content than ever before.

“I think the potential of what the internet is going to do to society, both good and bad, is unimaginable,” Bowie said. “I think we’re actually on the cusp of something exhilarating and terrifying.”

In a quote tweet, Loeb underscored the importance of media companies focusing on streaming over more traditional formats.

“Exactly and original content on streaming can’t just be repurposed Theatrical Releases or network television shows,” Loeb said. “Content must be designed to engage, entertain and delight with DTC channel in mind.”

Last month, Loeb sent a letter to Disney CEO Robert Chapek, suggesting he invest capital in Disney+ as opposed to doling out the company’s $3 billion annual dividend to shareholders (Loeb himself is one of Disney’s largest shareholders).

"By reallocating a dividend of a few dollars per share, Disney could more than double its Disney+ original content budget," Loeb wrote. "The ability to drive subscriber growth, reduce churn, and increase pricing present the opportunity to create tens of billions of dollars in incremental value for Disney shareholders in short order, and hundreds of billions once the platform reaches larger scale." 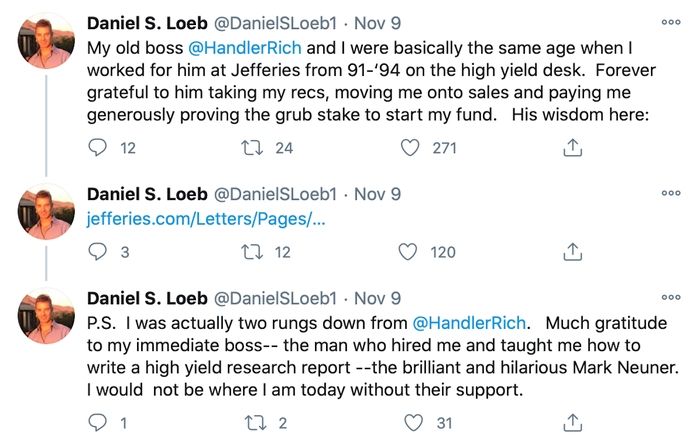 Loeb shared a brief anecdote about his old boss, Jefferies Financial Group CEO Rich Handler, who was “basically the same age” as Loeb when they worked together in the early 90s. Handler had just published a series of business lessons which Loeb linked to.

The list, “20 Things I Wish Someone Told Me The Day I Started My Career As An Analyst On Wall Street,” is worth a read for anyone interested in navigating the world of finance. 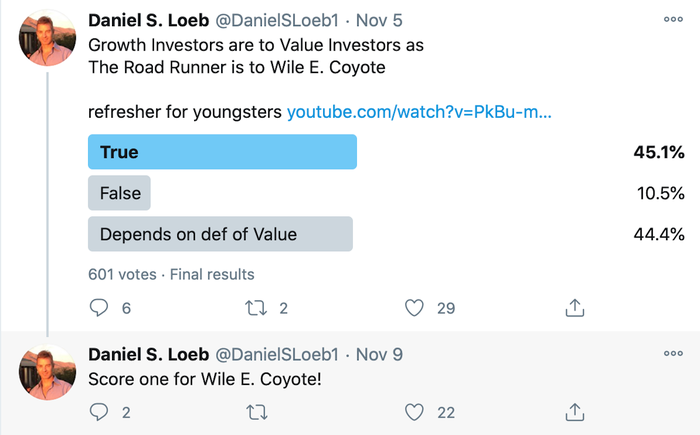 In a Twitter survey, Loeb asked if the following was true: “Growth Investors are to Value Investors as The Road Runner is to Wile E. Coyote.” Judging by the 45.1% who said “true,” we’re guessing Loeb has a point. He followed up with a link to some Looney Tunes clips (the digitally animated reboot, not the original cartoon).