The ambitious, bold and hungry start their week with The Business of Business!
Crypto
2.16.22   4:02 PM Crypto

If you’re at all familiar with Bitcoin, you’ve probably heard about its massive gains – and its massive energy costs. New cryptocurrencies and DeFi projects are building out a greener model of blockchain and promising annual percentage yields from 100% to 382,945% for investors who “stake” tokens. If this sounds too good to be true, you’re probably not wrong — but there’s more to the story.

In order to understand staking, it’s important to understand the basics of blockchain technology. If you’ve heard of crypto mining or the environmental cost of NFTs, you’re probably thinking of a proof-of-work system, which currently powers Bitcoin, Ethereum, and many other major cryptocurrencies. In order to add transactions to the blockchain, computers perform resource-intense calculations (the “work” in proof-of-work) and compete to be the first to mine the block in exchange for a substantial reward.

Proof-of-stake systems work differently. Rather than adding transactions to the blockchain through computing power, holders of the currency put their money on the line to prove their integrity. By “staking,” or locking up, some of their tokens as collateral, stakers can act as “nodes,” playing the role of miners by verifying transactions without sacrificing time and energy.

Proof-of-stake models are gaining popularity because they do away with mining, making them much more energy efficient. Transactions are also much faster. Coins that run on the proof-of-stake model can claim thousands of transactions per second, orders of magnitude more than bitcoin’s three-ish. Still, many popular coins continue to use the proof-of-work model with coins continuing to vie for public attention. According to Thinknum’s data, the blockchain platform Solana, which runs the $SOL coin, is currently leading the pack of proof-of-work coins in its Twitter following, having overtaken Cardano (symbol $ADA) on January 1, 2022.

Here’s where the crazy APY claims come in: in return for staking cryptocurrency, nodes receive payouts whenever they’re chosen to contribute a block. The process for choosing is random, but it is weighted by the amount staked, so the more a node stakes, the higher chance it has to be chosen – which means a higher probability of a payout.

If you make the right bet, your staking returns can pay incredible dividends, and pay them quickly, especially since many coins have the ability to compound automatically compared to the month or year-long compounding of traditional finance. These rewards often come as tokens of the cryptocurrency itself, though, and if the underlying coin becomes worthless, your staking rewards become worthless too.

When you see a coin promise dramatic returns like 200% for $LOOKS (at the time of publishing) or over 100,000% for $TITANO, beware: those rates might be technically accurate given a best-case scenario projection, but a lot can change in a year, and those rates — or the value of the underlying tokens — is unlikely to hold.

Staking can also introduce complications such as limits on how soon you can withdraw your coins after staking, a minimum amount needed to stake, or “slashing” penalties, which occur when a node fails to do its job properly. 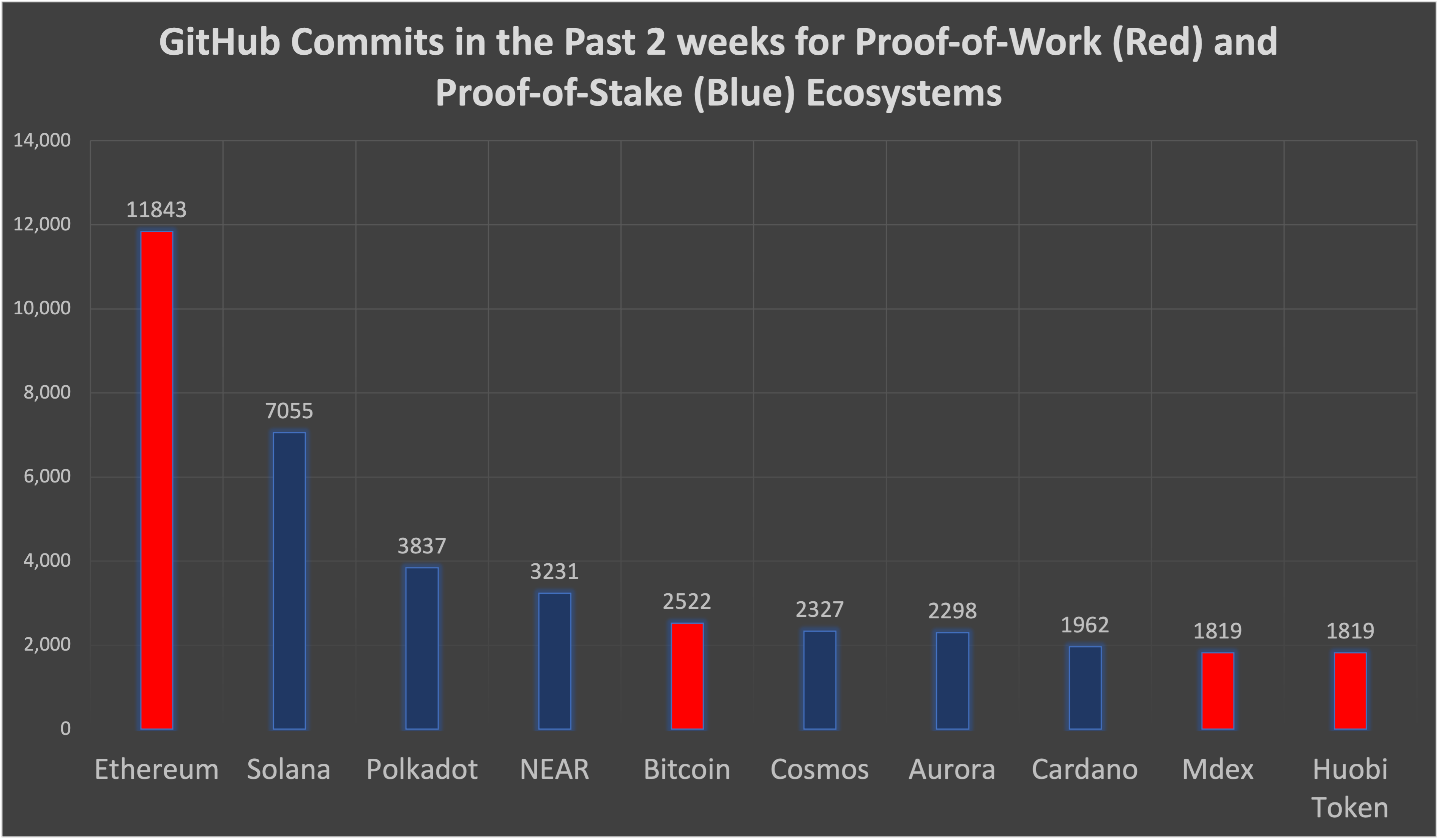 The model is nonetheless gaining popularity. Data collected by Thinknum shows that developers are working hard on proof-of-stake models, as evidenced by the number of GitHub commits over the last two weeks. Also of note: Ethereum, which currently runs on a proof-of-work system, is currently in the process of transitioning to a proof-of-stake system, commonly known as ETH2 or Ethereum 2.0. This means Ethereum will be able to reap the benefits of proof-of-stake systems, such as scaling up to thousands of transactions per second compared to its current average of 16 and eliminating environmentally harmful mining.

Ethereum staking is already live, and the Ethereum Foundation plans to move the entire chain to a proof-of-stake model by the second quarter of 2022 — though this date has been delayed several times. Its promises to stakers are much less impressive than other coins, though. Currently, staking ETH yields about 5% APY, but an individual running a node must lock up 32 ETH, about $100,000, for an entire year in order to reap the rewards. Users can pool together to hit this minimum, but there’s usually a fee involved — Coinbase offers automatic ETH staking, for example, but it takes 25% of your rewards.

Compared to the .5% APY of a typical savings account or the 10% average return of the S&P 500, staking Ethereum would appear to fall in the middle. However, the price of Ether is up nearly 80% from last year. Successful stakers need to be nimble, searching out coins that don’t just promise astonishing returns, but also reflect a legitimate value proposition.

Bitcoin remains the most popular and valuable cryptocurrency, but the environmental cost and low scalability of proof-of-work models may not be suited for the future of crypto. While the promise of a 100,000% annual return warrants careful consideration, the move of Ethereum to a proof of-stake model and the steady increase in interest in coins running on the model both lend legitimacy to the practice of staking in both the short and long term.