The ambitious, bold and hungry start their week with The Business of Business!
Features
12.14.20   2:00 PM Features

The Business of Business staff debates the value of video chatting.

“Zoom fatigue” doesn’t even begin to describe the exhausting, soul-crushing experience of living through 2020, but we’d bet that in a ranked survey of this year’s smaller miseries, many people would place it surprisingly near the top of their lists.

Like it or not, we’ve all been on some form of video chat platform this year — for work meetings, birthday parties, awkward holiday video calls, even for online dates. And with COVID-19 vaccines only starting to trickle out, we’re likely to be stuck in the waiting room, or on an unstable connection, for months to come. A quick Google search yields results on how to mitigate the sensation: try not to multitask during calls, build breaks into your workday, and one more — switch to phone calls if video isn’t necessary. Now there’s a thought.

Given how essential video calls have become, whether through Zoom or competitors Google Meet, Slack, or even (yikes) Cisco Webex, interest in them isn’t going anywhere. From December 2019 to April 2020, Zoom meeting participants (as opposed to Zoom users, who aren’t counted more than once) shot up from 10 million to 300 million. And according to our data, app store ratings for Zoom have, understandably, skyrocketed. In April, app store ratings for Zoom saw a 630% increase month-over-month, and ratings currently sit 1.46 million, up from 57,000 pre-pandemic.

Here at The Business of Business we are a video chat house divided. So we had a friendly debate (over Zoom, naturally): Are video chats really necessary?

Danny Konstantinovic: Julia's late. She said she was ready, and she's not here.

Ivan De Luce: This is unbelievable.

Danny: I got dressed for this. I was in sweatpants, and I was wearing a hoodie without a T-shirt. And now I'm wearing a T-shirt.

Danny: It's being recorded right now.

Ivan: Too late. Red light is on.

Julia: Maybe we'll FaceTune me. Give me giant anime eyes. Can we do fun backgrounds? I think that's the only good thing about Zoom, is you can get creative with it. One second. Can you see? Here's me with David Schwimmer. Are you ready? This is me with Cameron Diaz and Crazy Frog. See? My friends and I used to do a lot of Zoom birthday parties and Zoom get-togethers. They were all kind of depressing.

Danny: I don't think there's such a thing as a not-depressing Zoom.

Julia: Let’s start the debate. So, for office communications, video chat: good or bad?  How has the pandemic video chat lifestyle been for you thus far?

Ivan: I find that I'm too busy trying to look good, and making sure my box looks good, to be listening to others sometimes, which is, I know, a rookie mistake, but I still-

Danny: If you think I'm looking at anything other than my own little box you're out of your mind.

Julia: Do you think that Zoom is complimentary, or do you think you look worse on Zoom?

Danny: I think I look worse anytime I can see myself.

Julia: That's a great point. The thing is, our job title is not “model.”

Ivan: Is anyone here pro-Zoom?

Danny: I don't know. I feel very conflicted, because I think it has been good to see people, and have a percentage of a human connection.

Julia: For me, just seeing other people's interiors, their bedrooms, it's too personal. Usually my setup is right in front of my bed, and for some reason that's just one step too far. I don't want you seeing my bed. I don't want you to see my dumb posters.

Ivan: I don't want people to see this shelf I got when I was five.

Julia: I would like to know what's on top of the shelf. It looks maybe like a deflated strawberry

Ivan: You know what? It's funny, because I collect inflatable pool floats.

Julia: Everyone has one. I have a question. Most embarrassing moment on Zoom?

Danny: I have an embarrassing one. On my very first day-

Julia: I remember this.

Danny: I wore a nice shirt, and got dressed, because I wanted to mentally be at the office, or something like that. Every Monday morning we have a company-wide Zoom call...every single person in the 50-person company had their camera off.

Danny: And there's me sitting in the little corner, wearing a button-up shirt, just sitting there smiling.

Ivan: Right. I think the key with video chat is choice. Let us choose. I think that is what I'm going to advocate for, is Zoom choice. That's my platform.

Julia: I agree with you. Camera-optional. It shouldn't be mandatory. What if someone is...I was going to say in the desert.

Ivan: Or floating over San Francisco. Or coming back from a bank robbery. 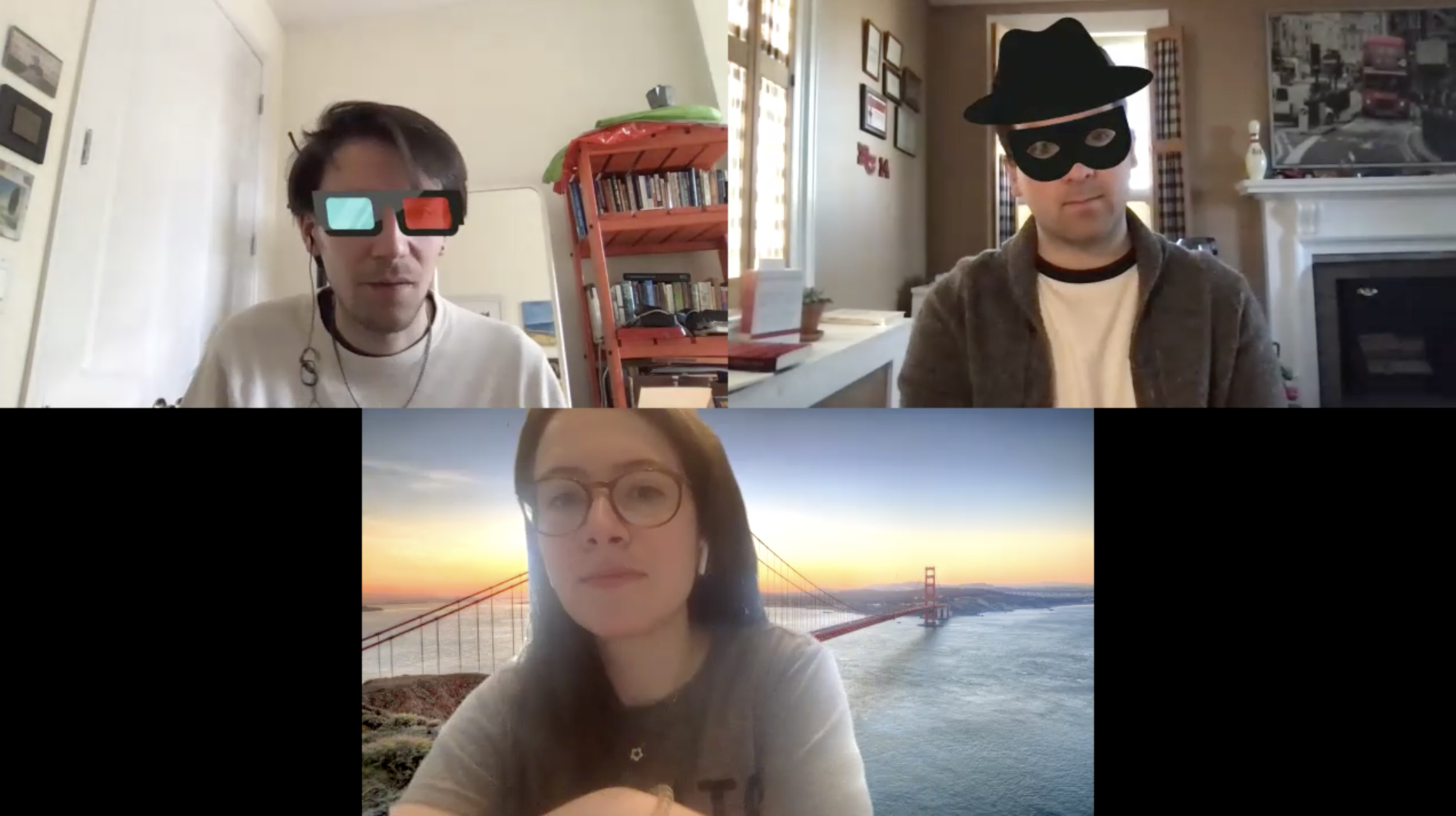 Julia: Yeah, I don't want to do that. I don't even want to FaceTime. There's a lot of Zoom fatigue going around. You're essentially performing. Speaking of performance, when we did the company-wide Zoom improv — and I absolutely killed it — I was exhausted for the rest of the day. I could hardly do another piece of work.

Ivan: You're more visible on Zoom, in a way that you wouldn’t be in a room of 30 people.

Danny: But no one is watching you, because everyone is looking at themselves.

Ivan: I call that the Zoom paradox.

Danny: But looking at yourself, perceiving the self, is more exhausting than being perceived by others.

Julia: My new book is called The Zoom Dilemma.

I'm trying to think of my most embarrassing video chat moment. It might be when our boss, at the beginning of our last meeting, said, "Julia, are you in a dungeon?"

Danny: Where were you?

Julia: I was in my parent's basement. So I said, "I'm in the dungeon of my youth."

Ivan: That should be your memoir, The Dungeon of My Youth.

Ivan: In the past, phone calls were fine. It's not only that Zoom is replacing in-person communication. It's starting to replace phone calls. As a reporter, obviously, talking in person is great, but most of us end up on the phone as the second-best thing. I find that the phone is better than Zoom for interviewing, personally.

Ivan: And when we say Zoom, we’re talking about all video chat communication tools, right?

Julia: Zoom is a catchall phrase as far as I'm concerned. Zoom is Google, but no one’s using Bing.

I think Zoom did a good job of making itself more than just an office communication tool. People do Zoom hangouts. Like, you're not going to host your book club on Cisco Webex. You're just not.

Ivan: Oh god. I did do a few Zoom book clubs this year. It was fine.

Julia: I did too. I have some Grapes of Wrath and Anna Karenina backgrounds, actually. Here's the train that killed Anna Karenina.

Danny: You're here dunking on Zoom, when you have a million backgrounds prepared.

Julia: My friends and I were Zoomy for a bit, but I think it really, just the fatigue set in. And now I can't think of anything worse than catching up with my friends on Zoom.

Danny: Getting hit by a train, like Anna Karenina.

Ivan: Work Zoom is bad. Zoom with friends is worse. And the worst Zoom of all is with distant relatives that you only see once a year anyway.

I had an awful Zoom call with some relatives that I care about and love, of course, but I don't want to Zoom them. It was my stepmom's family in Dublin. The entire family in America had to stand awkwardly together like this for 20 minutes, like a moving postcard. 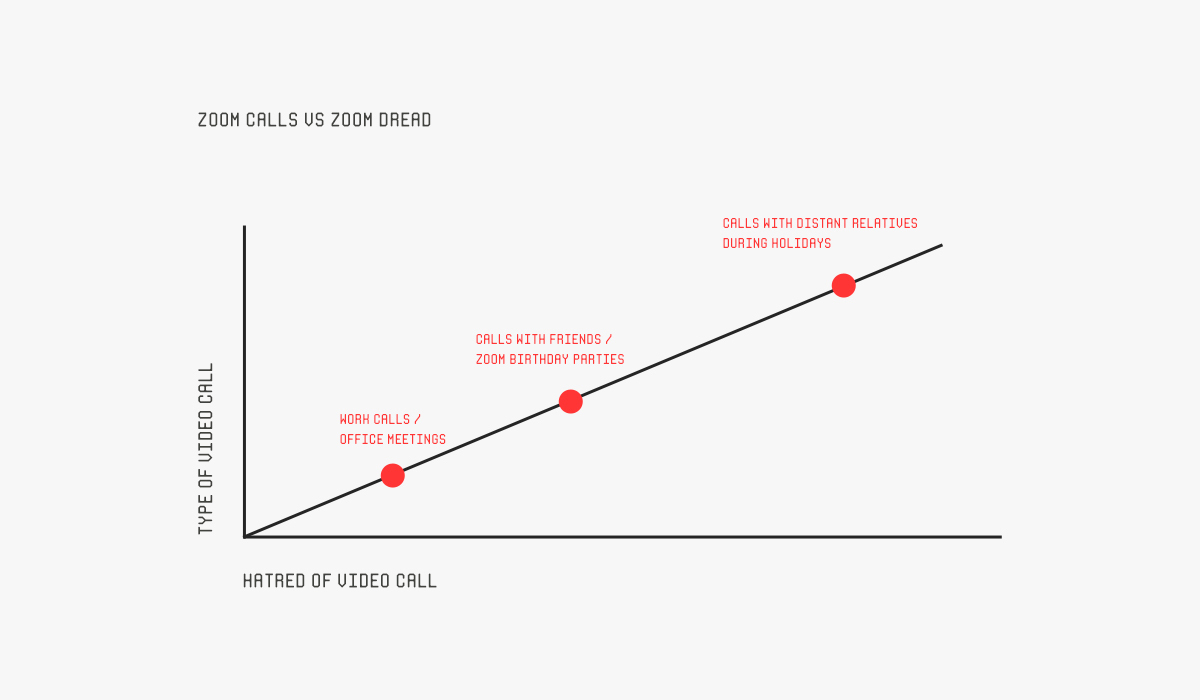 Julia: Should we have concluding statements?

Danny: I'll go first, I guess. Using Zoom sucks and  I would much rather do a video call via Slack. Anything that makes me have to go outside of Slack and my email to do work communications, I'm not a fan of. But clearly Zoom has been a big success, and now they're doing a Zoom app store. So who knows? Maybe they're trying to turn into a Slack, or something like that. I hate using it. I long to never use it again, but I suspect I'll be using it for the rest of my life. All that said, I think it allows for good things, like working remotely, people being able to work abroad.

Julia: I think that Zoom is fine but cameras should be optional. I think we should bring back calling, bring back the landline. We don't need to see each other, especially at this time. We're going through enough. We don't need to see each other's pathetic bedrooms and messy hair and sweatpants. It's not what we need. It doesn't help office communication or friendships. And that's my closing statement.

Ivan: So as far as debates go, I find the best debates are when two people can respectfully disagree and learn about each other's opinions. It seems like everyone on planet Earth hates Zoom, except for maybe some Zoom employees. I don't know. Maybe they believe in their product.

Ivan: I think that what you guys have said is really valid. And when Danny said that he's worried that he's going to be calling people on Zoom for the rest of his life, he might be right. And it's making me question a lot of things. But I think that overall we should bring back phones. We have them right here. They work the same way that they've always worked, you know? The phone aspect of the iPhone, it's the least important thing on here, as many people noted in 2007. But I think it's worth thinking about that again. Just call people. There's nothing wrong with calling people.

Danny: I will also say that I disagree with Ivan, that the best debate isn't one where people learn from each other. It's the one where I win. Also, that it feels wrong to look at people's rooms.

Bumble's IPO has investors buzzing, but data show it's falling behind the queen bee of dating apps

Tinder is the daddy of online dating, but Bumble is hoping its upcoming IPO gives it the strength to compete with Match Group's formidable lineup of dating apps.
Julia Gray
1.19.21   7:00 PM
Markets

The Warriors weren't even his first choice: Chamath Palihapitiya explains one of the most successful NBA investments of all time

The Social Capital CEO and SPAC guru explains how needing to diversify his holdings led him to Golden State, just as they were becoming a dynasty franchise.
Ivan De Luce
1.19.21   7:00 PM
People

The pandemic is creating pharmacy deserts

Shutting down Parler was a show of force from Silicon Valley, but the game of platform whack-a-mole may just be starting.
Jael Goldfine
1.14.21   9:30 PM
Tech

The FTC has been shutting down buyouts it sees as anti-competitive.
Jael Goldfine
1.14.21   6:30 PM
Markets

Y Combinator’s First Batch: Where are they now?

The famed startup accelerator was churning out hits like Reddit from its initial batch. Here’s a look at where Y Combinator’s first founders are today.
Ivan De Luce
1.14.21   4:00 PM
Tech
View All