How Silicon Valley’s favorite magician made his magic even more lucrative over Zoom: an interview with Daniel Chan

Magician Daniel Chan has wowed top tech companies with his illusions, but his greatest trick was making pandemic magic through interactive Zoom shows.

When the COVID-19 pandemic stopped the entertainment industry in its tracks, Daniel Chan’s career was booming. Chan had established himself as Silicon Valley’s go-to magician, performing for corporate events hosted by the likes of Google, Facebook, Twitter, Netflix, Walmart, Airbnb (and the list goes on). But with social distancing in full effect across the country, Chan wasn’t sure what to do once live shows were no longer possible.

“I honestly believed that my career as a magician might have been over when the shelter in place came into effect,” Chan told Thinknum. When he realized the pandemic wasn’t going anywhere, Chan decided to pivot to virtual events, choosing Zoom as his preferred platform. “I wasn’t the first to do a Zoom show, but once I committed to it and once I realized things weren’t changing, I was the first to become globally known through it.”

Many of Chan’s tricks were perfect for Zoom anyway. Chan’s style of magic isn’t just old fashioned tricks like cups and balls or playing cards. He prefers modern technology as a focal point of many shows, incorporating iPhone lockscreens, Instagram, and Google Maps into mind-reading tricks. Other tricks, involving playing cards or even business cards, are just as confounding, as I can confirm — during a recent Zoom call with Chan, I was fooled by one trick after another. I’m still not sure how a card I guessed, seemingly at random (or so I thought in the moment), could end up in the unlikeliest of places. I really did pick one off the top of my head!

From businessman to magic man

While Chan has performed over 5,000 shows since he began his magic career 20 years ago, he wasn’t always a magician. As a former pre-IPO PayPal employee, Chan was part of Silicon Valley culture from the early 2000s. But instead of quitting to pursue magic full time, Chan honed his skills while staying with PayPal.

“When I was at PayPal, I was taking afternoons off once in a while,” Chan said. “I wouldn’t do it that often, because I didn’t want to push my luck, but if there was a big corporate event, I would take it. And I was making more, in a sense, per hour when I was doing those events.”

Chan started out doing children’s events before taking on corporate ones, which required a different approach most magicians didn’t have.

“Where I’m at right now is I’m doing events at the Ritz Carlton, the Four Seasons, elegant events, because most magicians, even the guys I surpassed, they have this comedy magic image, which to me is a low status positioning,” Chan said. “Because they’re acting silly because it works and it’s very formulaic. But if you want to be more intelligent, before the show and during the show, you have to think like they do, you have to even sanitize, and even make it somewhat boring. [Corporate shows are] less energetic and silly, but more intellectual.”

Magic as a business 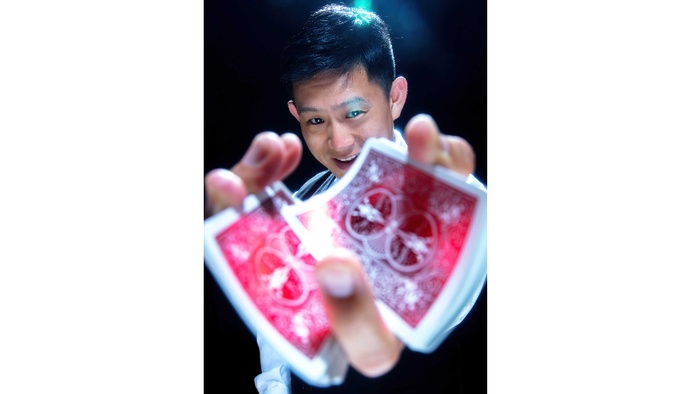 Chan thinks of himself as an entrepreneur first and a magician second. Though he used to practice card tricks in the high school cafeteria with friends, and slow down VHS tapes of David Copperfield to learn his tricks, magic has always been a vehicle for Chan’s entrepreneurship, not the other way around.

“So I always look at entrepreneurship as a runway,” he said. “You have to have enough vertical lift and speed in order to take off. There’s other ways to cheat that, but if you’re talking about a traditional plane, you have to have liftoff.”

Like all entrepreneurs, Chan follows many of the tenets of business school. To be a successful magician, according to Chan, means knowing what’s going on in the marketplace, knowing your competitors, and, of course, differentiating yourself from them. “Knowing who your audience is, and not leaving that money on the table is important, because sometimes you’re gonna have family events, and sometimes you’re gonna have corporate events,” he said.

And, like many of the biggest figures in business, Chan knows people skills are key to success. “Magic isn’t about the secret,” he said. “It’s about relationships and how the people remember you. I want to be remembered as the most interesting person in the room and also as a business person.”

“Magic isn’t about the secret. It’s about relationships and how the people remember you" - Chan 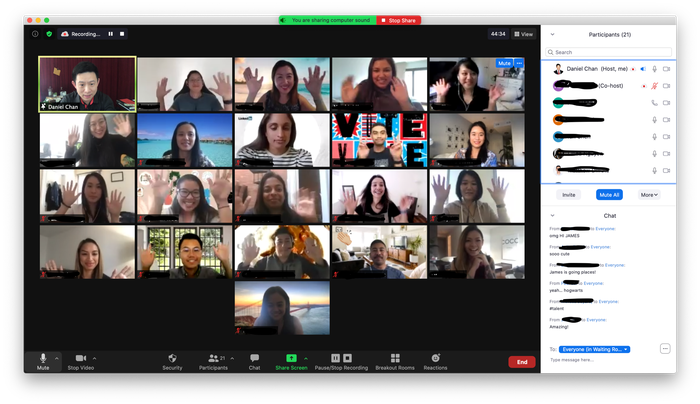 When Chan made Zoom his top priority, he realized he needed to make some changes to his act. He could no longer perform iPhone unlocking tricks or pickpocketing, but many of his other tricks fit the medium, and they remained interactive.

Zoom shows involve a lot less preparation than in person shows: no commute time, no hefty props, and no theater rentals. And close up tricks become easy to see for every audience member — with Zoom, they all get a front row seat. Chan can perform as many as five shows in one day, which would have been next to impossible pre-pandemic.

To date, Chan has performed around 150 Zoom shows, plus a few (socially distanced) in person shows, for clients all around the world, moving well beyond Silicon Valley. Companies pay anywhere from $500 to $5,000 depending on the illusions used, time booked, and overall demand on a given week.

While Zoom isn’t ideal (Chan once had a Zoombomber crash a rehearsal show to play pornographic material), it’s Chan’s platform of choice. “I have a show that needs to be good,” he said. “I can’t be thinking about which platform I’m using.”

“I have a show that needs to be good. I can’t be thinking about which platform I’m using" - Chan

Chan isn’t the only magician in the family. In fact, his son and daughter are magicians in training, and his wife is a balloon artist. His son, James, hosts his own Zoom magic shows, albeit at a lower price.

“When I got my son to get into magic, by age 5 he was performing, by age 8 he was juggling five balls, by age 10 he was doing three flaming torches and picking pockets,” Chan said. “And that allowed us to get onto Access Hollywood with Penn & Teller recently, he was on Kids Say the Darndest Things.”

Chan had planned out his son’s success from the beginning: “I reverse engineer success from a different perspective. I said to myself, ‘If my son on the streets of Palo Alto asks you, do you want to see a magic trick, people will say no. But if he was juggling five balls, or three flaming torches, you can’t ignore him.’ One of his first times street performing, he made $120 in two hours. Many years ago, when he was born, I said, ‘How am I going to structure this success?’”

Someday, says Chan, James will take over the family business. In the meantime, they’ll keep honing their illusions over Zoom.

Despite the temporary nature of pandemic life, Chan says Zoom isn’t going anywhere for entertainment. He envisions a future where entertainers will be recognized through Zoom or TikTok before anyone sees them perform in person. “Now our television is Zoom and TikTok,” he said. “The barriers of entry have been torn down.”