The ambitious, bold and hungry start their week with The Business of Business!
Outcasts
10.28.21   6:59 PM Outcasts

Twitter plays host to numerous anonymous accounts pumping stocks. Users are openly wondering which others might be “leading sheep to the slaughter.”

The fictional Alex DeLarge was a violent psychopath in Stanley Kubrick’s dystopian film A Clockwork Orange. Like the character he used as his Twitter persona, Steven Gallagher has allegedly engaged in some deviant activities, though Gallagher’s purported crimes were more of the “behind a computer screen” variety.

The 50-year-old Maumee, Ohio-resident stands accused of hyping penny stocks to his 70,000 Twitter followers, only to secretly sell them and pocket the gains. In other words, it was a classic pump-and-dump. It may also be called “scalping,” which involves an abuse of trust. (Day traders use the word “scalping" differently, to refer to a strategy of amassing small profits from many trades, which is not illegal.)

Gallagher was arrested Tuesday on federal criminal charges of securities fraud, wire fraud and market manipulation. He was also sued by the U.S. Securities and Exchange Commission over the same conduct. All told, he purportedly pushed at least 60 stocks starting in December 2019, reaping ill-gotten profits of as much as $3.4 million, according to the SEC. The criminal complaint, focusing on a smaller subset of the trades, puts total gains at $1 million.

In one example cited by the SEC, Gallagher loaded up on over-the-counter stock Marathon Group Corp. in early February. The web development company, which trades under the ticker PDPR, has shares worth just a fraction of a cent.

Through direct messages on Twitter, he encouraged followers to buy the stock. Days later, he publicly tweeted comments like, “IF YOU SELL $PDPR YOUR DUMB!” and “$PDPR READ-BUY=GET RICH!”

The same day he posted those tweets, Feb. 5, Gallagher sold more than 24 million shares of Marathon Group Corp. and made $89,000 in profits, the SEC said. The agency’s complaint suggested he might have worked in concert with conspirators — not unlike DeLarge of the Kubrick film (based on the novel by Anthony Burgess) and his gang of “Droogs.” 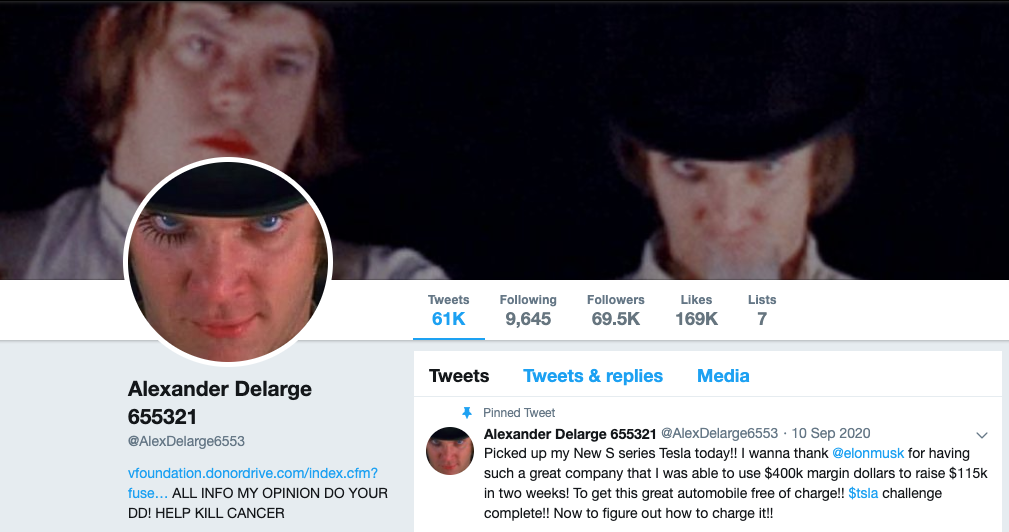 “Gallagher typically acquires millions of shares of a target security in advance of his promotional campaign — a practice he refers to as “loading” (also commonly known as ‘“frontloading’”),” the agency said. “He also often reaches an agreement with select associates on a date and time when they will start publicly tweeting a message telling his followers and public viewers to buy the target security.”

If he’s convicted in the criminal case, filed by the U.S. attorney’s office in Manhattan, he could also face up to 25 years in prison. (Technically he’s charged with several different crimes, each with penalties of 20 year or 25 years. In practice, prison sentences for multiple violations prosecuted together are usually served concurrently.)

In its civil lawsuit, the SEC is seeking disgorgement of profits, monetary penalties and an order barring him from trading penny stocks, among other sanctions.

Legally-speaking, Gallagher is innocent until proven guilty. Twitter, however, wasted no time in declaring him a villain. His account @AlexDelarge6553 was swiftly deactivated, and hundreds of users have been dancing on his (virtual) grave. Also, they’ve been pointing fingers at other popular stock-pumping accounts, and openly wondering which might be “next” to be taken down. [Update: As of Nov. 4, 2021, the account was reinstated, although was made private.]

“Like leading sheep to the slaughter, some traders have noticed stocks tanking after @AlexDelarge6553 has pumped them,” tweeted a user with the handle @JulsWesterfield. “ This is why it’s an absolute MUST to research and learn as a trader without relying on others.”

Other trading and market-related Twitter account holders quickly tried to distance themselves from Gallagher and his possible “gang.”

“Tag all the people @AlexDelarge6553 is associated with so I can make sure I’m not following them,” tweeted a user going by the name Moon Market. “I don’t want anything to do with the scum.”

Some users replied that they had seen similar activities on popular anonymous stock-related accounts such as ClairvoyantAlphaTrader, Canadian Jennifer, and Zack Morris, so named after the character on the television show Saved by the Bell. To be fair, the Zack Morris account, which has nearly 584,000 followers, also had defenders who declared that while the trader does “pump,” he does not “dump.”  Other account holders have also spoken up in defense of ClairvoyantAlphaTrader and Canadian Jennifer. We have not yet investigated whether the "pump and dump" claims raised about these accounts are true, and traders often trash-talk each other on the internet.

In response to this article, ClairvoyantAlphaTrader tweeted: "Keep my name out of this I DO NOT PUT AND DUMP still holding most of my shares from January IDIOT!"

Regulators and law enforcement have been increasingly scrutinizing amateur traders who use social media to push stocks. Those activities took off during the pandemic, as people spent more time at home using trading apps like Robinhood, and congregated on Reddit groups like r/WallStreetBets.

Some companies are surging ahead while others fall behind in these spaces before the metaverse is even built.
Othmane Zizi
1.11.22   10:11 PM
Innovation
View All